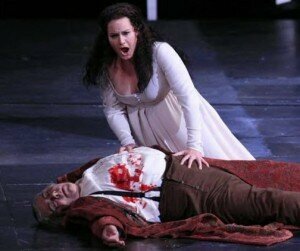 Donna Anna and the body of her newly slain father, The Commendatore (Met Opera, 2016)

In Haruki Murakami’s many novels, there are always a number of references that will appear: Cats, Ears, Hokkaido, Wells or Deep Holes, Jazz, Classical Music, and so on. In his latest novel, Killing Commendatore, we have music in the very title. As Mozart fans will know, The Commendatore is mortally wounded by Don Giovanni in the first scene of the opera, dying at the end of the scene. He dies defending the virtue of his daughter, Donna Anna. 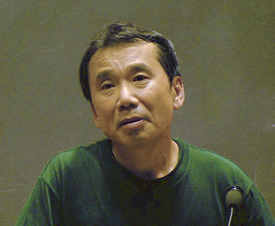 Later in the opera, Don Giovanni and his valet, Leporello, are in a graveyard, when the Commendatore’s statue on his monument speaks. Don Giovanni, in fatal impishness, has Leporello invite the marble statue to dinner that very evening. In the final scene, The Statue comes for dinner and takes the unrepentant Don Giovanni down to hell, to the accompaniment of a Chorus of Demons. 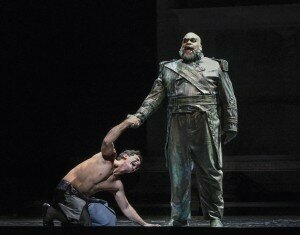 In Murakami’s novel, we have our hero, an unnamed, recently divorced, thirty-something portraitist, who is given a house in the countryside that used to belong to the painter Tomohiko Amada. In the attic he finds an unknown painting by Amada, entitled Killing Commendatore, depicting the bloody scene outside Donna Anna’s house that fatal evening. A Western topic, but done in a Japanese Asuka style (538-710 CE).

There’s a mysterious neighbor, Menshiki, who made his fortune in the tech business, and who has lost a daughter along the way. There’s the mysterious bell that rings in the night. There’s the mysterious entity, a personified idea who takes the name ‘Commendatore,’ which appears but that must be invited to enter a house. So many stories and so many details, that it’s almost as though the reliability of music is a relief. 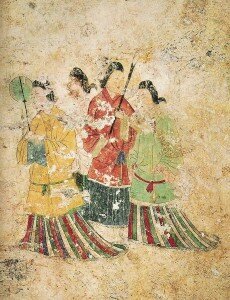 Women’s clothing in a wall mural from the west wall of the Takamatsuzuka Tomb, late 7th century, Asuka period

Reviewers link this novel with Murakami’s recently translation into Japanese of F. Scott Fitzgerald’s The Great Gatsby. The wealthy Menshiki, in his remote mountain McMansion, represents Gatsby, gazing across the valley/bay to his perhaps daughter/desired lover and the unnamed painter is the equivalent of Nick Carraway, Fitzgerald’s first-person narrator.

To occupy the mind of his models as he paints, our artist put, for example, the operas Der Rosenkavalier and, of course, Don Giovanni on the turntable (no CDs here!).

Strauss: Der Rosenkavalier, Op. 59, TrV 227: Act I: Wie du warst! Wie du bist (Claire Watson, The Marschellin; Brigitte Fassbaender, Octavian; Bavarian State Orchestra; Carlos Kleiber, cond.)
We have Beethoven and Schubert string quartets, and a preponderance of German music in the house owner, the painter Tomohiko Amada studied in Germany. He does have recordings of Verdi and Puccini but Amada’s love is clearly German operas. Our narrator dismisses the recordings of Tchaikovsky, Rachmaninoff, Sibelius, Vivaldi, Debussy, and Ravel as ‘obligatory.’

Schubert: String Quartet No. 13 in A Minor, Op. 29, No. 1, D. 804: I. Allegro ma non troppo (Takács Quartet)
On the jazz side, we have Thelonious Monk, with Coleman Hawkins and Coltrane on his Monk’s Music album, Billy Holiday, Clifton Brown, and Tony Bennett.

His rock listening is a bit more adventurous, spanning albums by The Rolling Stones, The Doors, The Beatles and The Beach Boys from the 1960s to Roberta Flack in the 1970s and ABC and Bruce Springsteen in the 1980s. He takes particular delight in these albums, noting: 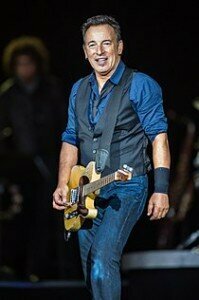 I put Bruce Springsteen’s The River on the turntable. Then I lay on the sofa, closed my eyes, and listened. When the A side of the first LP had finished, I turned it over and listened to the B side. Albums like The River have to be heard in this fashion. After “Independence Day” wraps up the A side, you take the record in both hands, turn it over, and carefully lower the stylus. “Hungry Heart” fills the room. What was the point of listening to The River any other way? In my personal opinion, when CDs strung together the sides of records like The River, they spoiled the experience. The same was true of Rubber Soul and Pet Sounds. Great music should be presented in its proper form. And listened to in a proper manner.

Yet, all of this is an old-fashioned attitude, he spends his time playing music of the past, in an old format. And our narrator himself is turning old-fashioned. He no longer wants to spend his time turning out his highly lucrative ‘commercial’ portraits; he wants to paint for himself. Yet, in the end, in a proper 21st century way, he can’t sustain this life: he returns to his wife (she never filed the divorce papers) and resumes the commercial painting that he’s so good at. The artist’s house burns down and the painting, Killing Commendatore, is destroyed. All returns to normal, for a given value of normal.