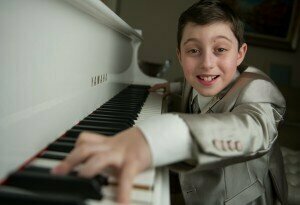 Curtis Elton at the piano

We’ve all seen them on YouTube – the tiny child at the vast piano playing technically and musically advanced repertoire. We marvel at their prowess, their facility and, more often than not, the extraordinary fleetness of their little fingers, as they rattle off Chopin’s most challenging Etudes or entire piano concertos.

Musical prodigies are not a new phenomenon – Mozart, Beethoven, Schubert and Mendelssohn were all described as prodigies – and so these modern “mini Mozarts” are following in a long tradition.

Daniel Barenboim, himself often described as a “child prodigy”, has suggested that these remarkable children as only prodigies in the eyes of their parents, and it’s true that some parents regard a special aptitude in a particularly young child as a sign of “giftedness”. This is in part due to a certain “Olympics syndrome” – a competitiveness amongst parents to push their children to greater things and to compete against other children, and their parents.

Why do prodigies, and specifically musical prodigies, fascinate us and provoke so much awed attention? Fundamentally, it’s the incongruity of seeing a child, especially a very young child, engaging in what is generally regarded as an adult activity for which substance, maturity, emotional depth and artistry are essential ingredients. True prodigies are able to function at an advanced adult level in a facility such as music, maths or chess before the age of 12, and so we marvel at these talented young people who seem to demonstrate, at their tender age, the very heights of human achievement.

Meanwhile, others may display a cynicism towards prodigious children: the critic Philip Hensher has commented that “serious art music could never be written by a child” and some point to the fact that young children lack the requisite knowledge, emotional intelligence or life experience to bring meaning or insight to the complex music they play; that they simply imitate others. For some, the parading of prodigious children on talent contests and chat shows, where they might be required to perform “tricks” such as improvisation on random notes pulled out of hat, is akin to watching a circus act.

Whatever one’s view, there is no question that prodigies and gifted children are different. Many are home-schooled, which immediately sets them apart from other “normal” children. For some, the state school system simply cannot fulfil their needs: exceptionally gifted children need specialist support just as children with learning difficulties such as dyslexia or dyspraxia do, and some child prodigies also have Attention Deficit Disorder, Obsessive Compulsive Disorder or Asperger’s. A heavy responsibility thus falls upon the parents of prodigious children to ensure they thrive, are supported, allowed as normal a childhood as possible, and to avoid burnout from peaking too soon or too much exposure before they are mature enough to cope with the attention. Equally, parents who do not support their child’s talent may deprive that child of the life he or she craves and is happiest in, which can lead to problems later on.

The latest “new Mozart” is Alma Deutscher, an apparently very bright and sweet British girl, who plays the piano and violin to a high level, and who, more remarkably, has by the age of just 12 composed concertos for violin and piano, a full-length opera (premiered in Vienna) and numerous other works. Her love of “beautiful music” is evident in her own works, which hark back to the 18th-century “galant” style and to the Romanic music of composers such as Schubert and Tchaikovsky. Alma herself dismisses the comparison to Mozart, but it’s a convenient tag for those who find her talents inexplicable or marketable. Her musical abilities and compositions have been widely praised, by such doyens as Sir Simon Rattle and Zubin Mehta amongst others, but also criticized for their derivative and unadventurous character. Yet when you listen to Alma Deutscher’s music it is perhaps exactly the type of sweet, tuneful romantic music one would expect from a little girl with a vivid imagination and a penchant for elaborate fantasy.

The anxiety over children such as Alma Deutscher is that they are missing out on a “normal childhood” and that as a consequence of too much exposure may burn out in their teens or twenties, and then fade into obscurity. As well as parental support, there is a responsibility on the media, artist agents and concert promoters et al to ensure prodigious children are not cynically exploited and are allowed to mature and develop as artists. The transition from child prodigy to grown up artist can be difficult, especially if one has spent much of one’s childhood confined to a practice room instead of playing with other children. The older the child, the harsher the criticism, the harder the fall from grace when the public and critics latch on to the next “little Mozart”. For every child prodigy who has gone on to enjoy a happy and fulfilling professional career, there are equally as many whose early precociousness has been replaced by disillusionment, depression or worse. The Australian pianist David Helfgott suffered terribly from his early exceptional talent and a domineering father: his career promise and descent into mental illness is poignantly portrayed in the film ‘Shine’. Meanwhile, the Venezuelan pianist and child prodigy Gabriela Montero, who made her concert debut at the age of 8, gave up playing the piano at 18 in order to gain some much-needed life experience. She returned to performing at 20 and now enjoys a successful international career.

Of course, the real challenge is whether the child prodigy can truly stand the test of time and is enjoying a successful career 20-plus years later as a fully-fledged mature artist. Notable examples include Daniel Barenboim, Martha Argerich, and Anne Sophie Mutter. Others simply retreat from the limelight into a contented ordinary life. One can but hope for happiest outcome for Alma Deutscher……