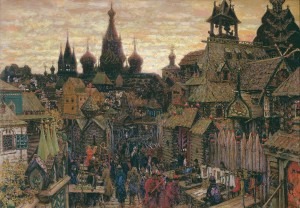 Old Moscow at the beginning of XVII century

Impoverished and evicted from his flat for failure to pay rent, Modest Mussorgsky once again sought refuge in the bottle. He had struggled with alcoholism for his entire life, and when four seizures in rapid succession saw him admitted to hospital, he still bribed an orderly to bring him cognac! Mussorgsky died barely a week after his 42nd birthday, and he left behind a disorderly mass of musical manuscripts. Among them was the opera Khovanschina, loosely translated as The Khovansky Affair. At an advanced stage of composition, Rimsky-Korsakov presented an initial version in St. Petersburg in 1886. The work resurfaced in Paris in 1911, with additions by Maurice Ravel and Igor Stravinsky during the Russian Ballet season. And finally, Khovanschina was pressed into a performing version by Dimitri Shostakovich, and staged in Leningrad in 1960. 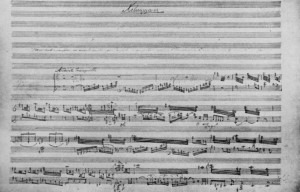 The plot centers on the Moscow Uprising of 1682, when Prince Ivan Khovansky and his followers opposed Tsar Peter the Great’s westernizing reforms. Eventually, the uprising called “Khovansky Affair” was suppressed, and the rebels commit mass suicide. Ironically, Peter the Great could not be represented on stage, as the dramatic representation of a Romanov was against the law. Nevertheless, Khovanschina has all the political intrigue, class conflict, secular-religious antagonism and feuding aristocrats to make it a highly appealing stage drama. However, the one essential thing missing from Mussorgsky’s original score was its orchestration. Mussorgsky left few indications as to how the scoring was to be handled, and Rimsky-Korsakov approached the prelude to the opera, called Dawn on the Moscow River, with his own orchestral sensibilities. Rather than presenting a city scene at the verge of a historical tragedy, Rimsky-Korsakov evokes an essentially pastoral setting by using bright woodwinds and light basses. A simply yet highly lyrical melody in the Russian folk style is presented in different orchestral and harmonic guises. Gradually rising figures in the strings suggest the first warming rays of the sun, and the distant bells of Moscow are poised to set the drama in motion.