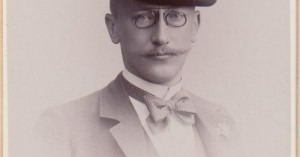 Starting in 1898, Jean Sibelius regularly, and ongoing for almost 30 years, wrote incidental music to accompany productions of staged drama. Sibelius was part of a group of Finnish poets, novelists, playwrights, visual artists, and composers who sought ways to translate the modern and symbolist creative spirit of France into their own Nordic culture. Among the group was Mikael Lybeck, a Finish/Swedish poet and writer who penned his first play Ödlan (The Lizard) in 1907. The story develops out of a triangular relationship among the main characters. Elsiv and Adla vie for the love of Count Alban, a conflicted yet sensitive and older head of a family estate. During an epic struggle between good and evil, Adla causes Elsiv to fall to her death. Once Count Alban becomes aware of the circumstances of Elsiv’s untimely demise, he takes revenge by pushing Adla off a balcony. Sibelius was not shy in telling Lybeck that the drama had gripped his soul. “It’s poetry, and above all, there is style. I’ll certainly compose the music you desire. To the best of my ability! Naturally!”

Jean Sibelius: Ödlan (The Lizard)
Working closely with Lybeck and the theatrical document, Sibelius crafted music for two scenes that fit the flow and shape of the drama. Sibelius made the crucial decision to locate the ensemble—a group of nine strings—behind the stage. As such, the music projected invisibly across the action out to the audience, “an effect that surely enhanced the otherworldly imagery that pervades the two scenes he set.” The music becomes an atmospheric canvas that makes expressive use of floating tonality and a chromatic melody to reveal its relationship to the genre of melodrama.
Although its effectiveness as a concert piece is limited, the score was described by Sibelius himself as “one of the most exquisite works that I have written.” Sibelius later conceded that the music for Ödlan “is impossible for anything other than the theater,” but it nevertheless marked a fundamental step for Sibelius towards the sound world of the Fourth Symphony.