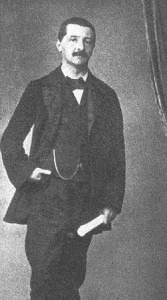 A man of humble origin, Anton Bruckner (1824-1896) retained his shy demeanour throughout his life. Son of a schoolmaster and church organist, Bruckner was educated at the monastery of St. Florian near Linz, Austria. Eventually, he found his way to Vienna, initially studying at the Vienna Conservatory and later taking appointments as the Emperor’s court organist and as professor of harmony and counterpoint at the Conservatory. His total admiration for Richard Wagner elicited deep-seated resentment within Vienna’s musical and critical circles, and for a while, the Vienna Philharmonic Orchestra even refused to perform his symphonies. By 1877, Bruckner had composed five of his monumental symphonies, however, the public and critical response to each had been lukewarm at best. Bruckner, habitually plagued by debilitating periods of low self-esteem devoted much of his energy over the next three years to corrections and revisions. However, surprisingly he also composed a string quintet!

Anton Bruckner: String Quintet in F major
Apparently Josef Hellmesberger—the famed Viennese violinist and leader of a renowned string quartet—repeatedly and insistently had asked Bruckner for a work for his ensemble. Bruckner finally relented and composed the work between December 1877 and July 1879. By including an extra viola, Bruckner managed to capture his characteristic symphonic sonorities in miniature form. In the event, Hellmesberger had nothing but complaints about the work, and he was particularly unhappy with the Scherzo. Brucker quickly composed a substitute movement, later independently issued as the “Intermezzo.” When Hellmesberger officially premiered the work in 1885, the critic Max Kalbeck published a predictably scathing review: “Bruckner is clearly the most dangerous of the modern composers. His ideas are so unpredictable and erratic. They possess a seductive and hypnotic power which makes them even more treacherous than the refined and clever sophistries of the others…His music bears the heavenly fragrance of roses and the nauseating stink of hell.” Given this type of reception it’s no surprise that Bruckner’s brief excursion into the realm of chamber music came to a quick end.