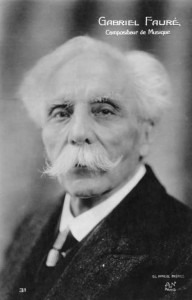 Gabriel Fauré (1845-1924) is rightfully considered the most advanced French composer of his generation. His highly personalized musical style, reflected in soulful modal melodies and a colorful harmonic language, greatly influenced subsequent generations of composers. Above all, Fauré was a revered teacher and a proactive administrator on behalf of music. He became Professor of Composition at the Paris Conservatoire in 1896, teaching among others, Maurice Ravel, Georges Enescu and Nadia Boulanger. And when he was appointed as director of the Conservatoire in 1905, he eagerly reformed the curriculum of this most prestigious musical institution in France. For much of Fauré’s compositional career, music for and with the piano had taken center stage. However, for his final composition— the String Quartet Op. 121 completed in 1924— the composer turned away from his favorite instrument and instead wrote music for the prototypical ensemble genre of Classical Music.

Gabriel Fauré: String Quartet, Op. 121
“I’ve started a quartet for strings, without piano,” Fauré wrote to his wife. “This is a genre made particularly famous by Beethoven, so that anyone who is not Beethoven is scared stiff of it!”

The opening “Allegro” provides a quiet and contemplative beginning that is bathed in Fauré’s typically ethereal harmonic and melodic language. A quiet musical dialogue between the first violin and the cello dominates much of this movement, if not the entire composition. Brief intensifications of the musical language aside, with the cello urging the musical conversation, this movement never deviates from a state of restrained emotionality. The contemplative musical aesthetic introduced in the first movement is further magnified in the slow “Andante,” as Fauré provides an instrumental choir of lament. In the concluding “Allegro” the cello sings an urging melody, accompanied by pizzicato upper strings. In fact, the pizzicato accompaniment provides the musical pulse for much of the movement, only allowing for a singular emotional outburst in the final measures of the piece.