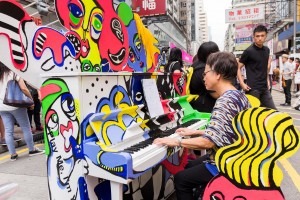 Scattered in moveable sites around the streets and buildings of Hong Kong are decorated pianos that are all part of an international piano artwork by artist Luke Jerram. Since 2008, in more than 47 cities around the world, 1,500 street pianos have been installed with the simple note: Play Me, I’m Yours. In Hong Kong, these piano appearances began in August 2015 and conclude in April 2016. 16 local artists designed pianos with distinct Hong Kong feature, including Cantonese Opera, traditional food stalls, the concrete jungle (playing on the piano makes the butterflies attached to the top quiver), the fashion industry (a piano in black and sequins, of course), and other local themes. Every piano has an invitation: Play Me, I’m Yours!

The reaction has been interesting, particularly in the city of a million piano lessons. Finally, students can put all those lessons to good use – and in public! What’s also striking in the various videos made over the past few months is that there are a lot of talented pianists in the city and it only gets better when they bring their friends to play violin or guitar or percussion.

Other programs have had dance versus piano battles and a 7-hour non-stop piano marathon. Events have been held at the new PMQ Art Centre on Hong Kong Island, out in the New Territories, in the middle of busy Kowloon street markets, all aiming to maximize the exposure of this joint art and music project.

Luke Jerram, who founded the project in Birmingham, England, in 2008, reacted to the comparative silence of the urban community. He noted that in his local laundrette, he saw the same people week after week and they never talked to each other. When he put a piano into the space, peoples’ interactions changed for the positive. People have met around the pianos and he takes credit for his piano project bringing the cause of more than one wedding! 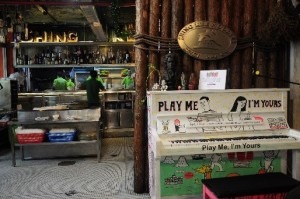 By placing the pianos into the urban environment, Jerram wants to disrupt people’s normal relationship with their cities and to push them into engaging, activating and claiming ownership of their urban landscape. It also brings out the hidden pianists in what might normally be an anonymous crowd. One long-term placement of a piano in Herne Hill, outside London, has provided a complete change in the environment – from classical to jazz, Chopsticks to Chopin, to simple improve, all kinds of music are launched into the air. Herne Hill is not longer just a suburban train stop, but a locus for music making of all kinds.

It seems clear, from the looks on the faces of the listeners, to the delight of the players, that taking the piano out of the front room, out of the practice room, or out of the concert hall and making it accessible is a way to change peoples’ interaction with art, music, and, probably most importantly, each other.

Venues for 2016 include for Street Pianos will be Mesa, Arizona, and Florence, South Carolina, in the US, and, starting in March, in Singapore.