Opinion
No talking in the stalls please!
by Frances Wilson March 8th, 2016 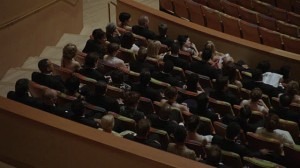 Recently I gave a concert in a local church. The audience was small, but they listened attentively and seemed genuinely engaged by the music. All except one person (someone who is connected to me through marriage – but not, I hasten to add, my husband!) who talked throughout the entire performance. This was extremely discourteous, not only to me but also to the other members of the audience. Luckily, it didn’t put me off my playing, but I was aware of the talking during the quieter passages of my programme.

Extraneous noise at concerts – coughing, unwrapping sweets, rustling programmes, whistling hearing aids, talking – is the bane of the performer, and the concert-goer. In her latest book Sleeping in Temples, pianist and writer Susan Tomes devotes a whole chapter to the subject of coughing and audience noise in general (she wittily calls the chapter ‘Bullfrogs’) and the blogosphere was alive with exclamations and hand-wringing not so long ago when violinist Kyung Wah Chung berated the parents of a young child who coughed during her recent concert at London’s Southbank Centre.

The popularity of smartphones has added another irritant to concerts – people taking photographs, filming and texting during the performance: a couple of years ago, I watched most of the second half of a concert by Yuja Wang through the video app of someone’s iPhone. The illuminated screen can be disturbing to other concert-goers, and if you are texting or browsing the internet during a performance, it suggests you are not concentrating fully on the music, which is just plain discourteous to the musicians who have spent hours upon unpaid hours in rehearsal to bring this wonderful music to you.

A curious dichotomy exists in the world of live classical music concerts. Tradition and concert etiquette dictate that we sit in hushed reverence during the performance, stifle coughing and generally attempt to be extremely quiet. This enables us to concentrate on the music and avoids unnecessary distractions for the performers. Yet, as John Cage proved in his work 4’33”, in a concert hall there is no such thing as “absolute silence” – for people are living and breathing, moving……

For performers, the sound of the audience can be extremely helpful, and most of us who perform enjoy the sound of the audience listening and engaging with the music (I also really like that “collective sigh” that seems to come at the end of a fine performance, before the applause, almost like a giant cat uncurling and stretching). It undoubtedly adds to the excitement of a live performance and reminds us that the music we play is intended to be shared with others. I love being at or giving a concert where one has a strong sense of the audience listening very carefully, a palpable sense of intense combined concentration.

Of course, people can’t help coughing (go to a concert in London in the winter, and there is often a veritable cacophony of raucous coughing and nose-blowing), or moving in their seats, or turning the pages of the programme, but whispering and talking, tapping away or filming on a smartphone, or noisily fidgeting or even eating during a performance is just plain rude and should be discouraged.