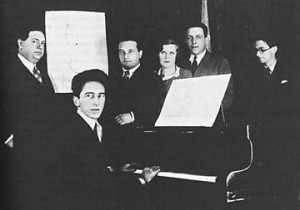 Hot on the heels of the shocking notoriety achieved with Parade, Jean Cocteau went to work on a surrealist spectacle entitled The Wedding Party on the Eiffel Tower. He described it as a sort of secret marriage between Ancient Greek Tragedy and a Christmas Pantomime. It combined his love of the music hall with the theatre of the absurd and mischievously set out to once again shock the public. In the preface to his play Cocteau writes, “The young music of today employs a clarity, a simplicity, a good humor, that are new… In Wedding Party we employ all the popular resources that France will have none of at home, but will approve whenever a musician, naïve or foreign, exploits them outside.” The action takes place on the first platform of the Eiffel tower, and satirizes a bourgeois wedding-party who celebrate their nuptials with a banquet and a wedding photo. Unfortunately, at the words “everybody smile” a whole host of creatures and strange apparitions emerge through the lens of the camera. Two actors encased in cabinets resembling phonographs narrate the story through large gramophone horns, and dancers mime the action. The music for this spectacle was composed by five members of a group of French composers, George Auric, Louis Durey, Arthur Honegger, Darius Milhaud, Francis Poulenc and Germaine Tailleferre, affectionately known as “Les Six.” 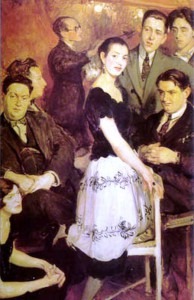 Cocteau asked George Auric, whose brilliant and often acidly aggressive musical style had become well established, to compose the “Overture.” During the overture an ostrich rushes past, pursued by a hunter who attempts to shoot it, but kills a telegram instead. The manager of the Eiffel Tower rushes in, and is closely followed by the photographer chasing after the ostrich. It had jumped out of his camera and he is desperately trying to get it back in. The arrival of the “Wedding Party” is accompanied by Darius Milhaud’s music, whose quirky inventiveness calls for the simultaneous sounding of music on two different harmonic planes. Among the wedding guests we find a boring old General who makes a lengthy and tedious speech about mirages in Africa, with a charming Lady Cyclist pedaling by. In a cheeky polka for 2 Cornets, Francis Poulenc provides the musical representation of the General’s hallucinations. The Photographer now attempts to take the wedding picture and the group poses, but at the magic words “everybody smile,” the “Bathing Beauty from Trouville” appears. She wears a one-piece bathing suit and carries a butterfly net that has captured a heart. The photographer is not amused and is trying to make the beauty get back into the camera. Finally, by convincing her that his camera is a bathhouse, she disappears back into the apparatus skipping and throwing kisses to the sounds of an exquisite Poulenc waltz. The Photographer decides to have another go at taking the picture. This time, a fat little boy appears. He is the child of the future, and everybody agrees that he will most probably become a beautiful little victim of the next war. 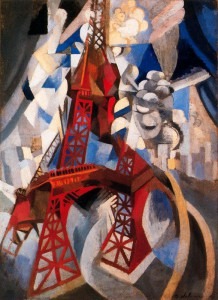 The fat boy in the meantime greedily eyes a plate of macaroons and bombards the wedding guests with Ping-Pong balls, all to the strains of the “Massacre Fugue” composed by Darius Milhaud. The manager pleads for a little less noise as it is frightening the telegrams who have just arrived from New York. The telegrams — five ballerinas in blue — dance a Viennese-style waltz composed by the only female member of “Les Six,” Germaine Tailleferre. The next attempt at taking the photo sees a lion jumping out off the camera and devouring the old General. This scene is accompanied by a solemn funeral march composed by Arthur Honegger, who re-quoted the violin solo heard earlier in Milhaud’s “Wedding March.” At this point, the child of the future wants to buy some bread and feed the Eiffel tower but is immediately admonished by the second Phonograph declaring, “It is only fed at certain hours.” A group of Republican Guards arrives and begins to dance a quadrille, with the music composed by Tailleferre. The photographer finally captures the Ostrich and announces that the camera is mended. The guests freeze in anticipation of being photographed at last, but a dealer in modern paintings enters, sees the motionless “Wedding Party,” and promptly sells it to a collector for an enormous sum. The photograph is finally taken and this time a dove flies out. Peace at last, cries the first phonograph and to George Auric’s jolly “Ritournelles” the various wedding guests disappear into the giant camera. The manager announces that the Eiffel Tower is closing for the day, and to a brief reprise of Milhaud’s “Wedding March” the camera moves across the stage like a railway coach. In this play, Cocteau relies on a series of scenes or acts whose relation to one another is nonexistent. These acts are presented without transition, much in the style of the music hall revue. Cocteau’s choice of the Eiffel Tower is highly significant. Built for the Paris Exhibition of 1889, it had served not only as a monument to nineteenth-century engineering skill but, as the century turned, as an expression of French cultural values and a source for the discovery of contemporary dynamics. “Of all the artistic conspiracies in which I have participated,” Cocteau writes, “this is the only one that did not end up aged and outdated by changing fashions. Why? Let me tell you. We made not a single concession.”