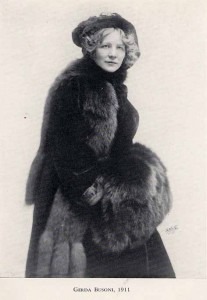 It is rather commonplace for children, even after they have all grown up, to keep assorted secrets from their parents. As long as it concerns the acquisition of a pet or a new plant, no harm done. However, when things turn to matters of engagement and marriage, things tend to get a bit more hazardous. In the spring of 1889, Ferruccio Busoni formally asked for Gerda Sjöstrand’s hand in marriage. Sensing resistance from his own parents, however, Busoni kept the engagement a secret for a number of months. While Gerda remained in Helsinki, Busoni spent his summer in Weimar and eventually received a visit from his parents. When Anna Busoni noticed a photograph of Gerda, “Mamma went up to the desk and of course the first thing she asked was who the photograph was of. Not to frighten her too soon I said: ‘It’s a girl I like very much.’ Mamma pretended not to have heard the answer. That evening, when we got home after supper, Mamma went to look at the portrait again. ‘Do you like the girl, Mamma,’ I asked? ‘I haven’t looked yet, the frame is so beautiful. The picture is not bad, but she would not be my ideal.’ But she is my ideal, I told here. ‘But the frame is beautiful,’ she repeated, ‘and now good night.” The truth finally came out over lunch the next day. During a discussion on women smoking, his father casually asked, “Does that one, in the picture, smoke too? ‘Yes, if I want; not if I don’t want.’ So my father finally asked if there was a relationship between us. ‘Yes, because she is my fiancée.’ My parents were not surprised and said they had already talked to one another, that in such a case they would never say anything against it, but let me have my own way.”

However, when Busoni’s father left a week later, the real struggle between Ferruccio and his mother began. “Her resistance to her son’s possible marriage was visceral and relentless, although it was expressed obliquely, for the most part.” During a nice afternoon walk on 23 August, the verbiage apparently started to fly. Ferruccio wrote to Gerda, “Mamma referred to you with careless words and insulted you and me. I didn’t say another word, but felt myself go pale and trembling. I was like that for a good half hour until my mother said. ‘Ferruccio, what’s the matter with you, I can’t see you like that any longer, on which I broke down into convulsive sobbing that lasted a long time.” In early September Busoni left his mother in Weimar and played concerts in Berlin, Dresden, and Leipzig. By mid-September, at the insistence of his mother, Ferruccio and Anna Busoni arrived in Helsinki. Gerda later recalled, “I shall never forget that evening when I went to the station. The impression the mother made on me with her gray hair, her big nose with some moles on it, was that of a witch from Macbeth. Yet she was anything but witch-like, she was a good, noble and intelligent woman. She loved her son so much that she was blind to everything else. The thought of now having to lose this son by marriage was simply unbearable for her. She would have been against any girl—I just happened to be the one.” 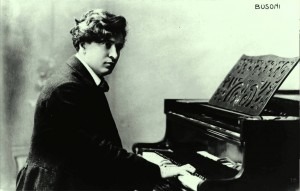 The two women communicated in French, and everything appeared amiable on the surface. Behind the scenes, however, Anna Busoni continued her relentless campaign against Gerda and insisted that the only way to save Ferruccio from a life of immorality was to live with him. Anna’s attacks on Gerda finally paid dividends, as in the early months of 1890, Gerda decided to break off the engagement. “When I suggested that it would be better to part, and in fact do it now as later it would be only more difficult, he smothered me with a flood of kisses. Never could that happen, he said; his mother should go and live with his father, and we must stay together. ‘If you leave me,’ he said, ‘I’ll lose all my strength.” And with that, breaking off the engagements was no longer an option.

Ferruccio Busoni: Konzertstück, Op. 31a
In the meantime, Busoni had won the prize for composition at the first Anton Rubinstein Competition with his Konzertstück (Concert Piece) for piano and orchestra. As a result he was invited to visit and teach at the Moscow Conservatoire, and Gerda was to follow him to Russia. “Soon I shall be married,” he wrote to his mother, “although you are against it, I nevertheless consider myself content and my decision a good one.” Anna Busoni had no intention of relenting, but Ferruccio quickly arranged with a German Protestant pastor to marry them in Moscow. Gerda and her father and sister arrived on 27 September 1890, and they were married that very day! Gerda, Ferruccio wrote, “became a faithful companion, patient and energetic at the same time, ready to sacrifice everything to make possible the achievement of my aspirations.” As it happens, Anna Busoni eventually warmed up nicely to her daughter-in-law, and she positively adored her grandchildren!