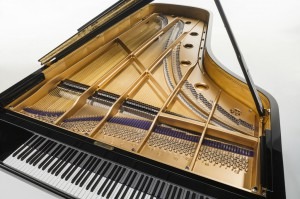 In May 2015, Argentinian-born pianist Daniel Barenboim unveiled a new piano bearing his name. From the audience’s perspective, it looked just like any other modern grand piano. However, once you actually open the lid and peer inside, you’ll immediately notice some rather dramatic differences. For one, the Barenboim has straight parallel strings instead of the diagonal-crossed ones commonly seen in contemporary pianos. It was Henry Steinway Jr. who patented the method of cross stringing in 1859. In this process, the strings are arranged in a vertically overlapping manner, with two heights of bridges on the soundboard instead of just one. This inventive arrangement actually saves a lot of space as the case of the piano can be smaller. Since the strings diagonally cross the center of the soundboard, they generally receive more resonance. With all these complicated string crossings on separate levels, modern pianos are frequently criticized for producing a rather murky sound. Barenboim, who has been happily playing a cross-stringed Steinway for 65 years, explains, “Its ubiquity is part of its strength. The great advantage of Steinway is that over the years it has created an instrument that has enormous homogeneity.” However, that homogeneity has come at the price of eliminating the distinct regional color registers that characterize nineteenth-century instruments.

Apparently, Barenboim noticed that simple fact when he played a restored grand piano previously owned by Franz Liszt. Struck by its transparency and clarity, he came up with a plan to combine the evenness of touch, stability and power of a modern instrument with the “transparent sound quality and distinguishable color registers of the historic instrument.” Barenboim contacted the Belgian instrument maker Chris Maene, who in turn secured parts from Steinway & Sons. And within 18 months and approximately 4,000 hours of exacting labor, the Barenboim Grand Piano was born. Forsaking the conventional string crossing, the Barenboim has the strings arranged in a parallel fashion, running perpendicular to the keyboard without overlapping. As a result, the soundboard veins, the bridges, ribs and bracings all had to be specially designed. Chris Maene has dreamed of building this new type of concert grand, “as it was always surprising that the fantastic and unique sound diversity of the grand pianos of the 19th century completely disappeared. As such, the 20th century offered us very similar instruments in regards of construction and sound.” 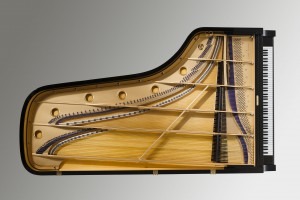 For Barenboim, “The transparency and tonal characteristics of the traditional straight-strung instruments is decidedly different from the homogenous tone produced by the modern piano across its entire range. The clearly distinguishable voices and color across its registers of Liszt’s piano inspired me to explore the possibility of combining these qualities with the power, looks, evenness of touch, stability of tuning and other technical advantages of the modern Steinway.” Barenboim has declared his piano as a sound alternative. “One piano was not better than the other but: “There is a difference in the quality of the sound … it has more transparency, more clarity and by itself less blend but it gives you the opportunity to create a blend yourself as a player – and I like that.” Public reaction to the Barenboim has been predominantly positive, with some listeners noticing the lack of resonance commonly expected from a modern piano. As it stands, the Barenboim Grand offers a viable alternative to the mass-produced boxes of homogeneity. There is much to be discovered in the unique sound world of the nineteenth century, and it might even be inspirational for modern composers. At this point, you can’t rush out and buy one. Only two pianos have been built so far, but Barenboim is hopeful that his piano will one day go into wider production.