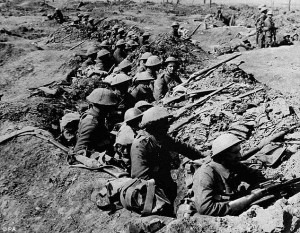 The Battle of the Somme
Credit: www.dailymail.co.uk

The Battle of the Somme was fought between 1 July and 18 November 1916. One of the largest and most brutal engagements of the First World War, almost one million men were wounded or killed! Among them was the young British composer George Butterworth, who was shot through the head by a sniper in August 1916. Butterworth was one of thousands of well-educated soldiers that chronicled their personal experiences through words, art and music. The writers Robert Graves, JRR Tolkien and Edmund Blunden left a legacy of poetry, memoirs and fiction that helped future generations to understand the reality of war. The same is true for Ralph Vaughan Williams, Gustav Holst and Maurice Ravel. Ravel had hoped to help his country as an aviator, but was considered too old and too short. As such, he served as a driver on the Verdun front, and he memorializes six of his dead friends in Le tombeau de Couperin. Arnold Schoenberg, entirely immersed into his reorganization of traditional tonality, was first drafted into the Austrian Army at age 42. He served for almost a year before a petition for his release was granted. One year later, he was called to active duty again, but given his advanced age, was assigned light duties in and around Vienna. 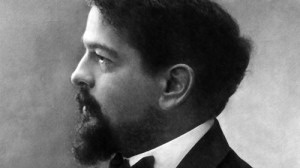 Claude Debussy, meanwhile, was fighting his own personal battle against colon cancer. He dejectedly wrote, “My age and fitness allow me at most to guard a fence…but, if, to assure victory, they are absolutely in need of another face to be bashed in, I’ll offer mine without question.” Just a couple of years earlier, Debussy had hoped for a quick end to hostilities, but was eventually drawn into a well-organized propaganda campaign protesting the violation of Belgian neutrality by the Germans. King Albert’s Book: A Tribute to the Belgian King and People from Representative Men and Woman Throughout the Word was published in November 1914, and included contributions by Edward Elgar, Jack London, Edith Wharton, Maurice Maeterlinck, among numerous others. Debussy contributed the Berceuse héroïque, a short improvisatory piano piece full of melancholy and discretion that the composer explained “has no pretensions other than to offer an homage to so much patient suffering.”
As the war entered its second year, life for Debussy and his family became a real challenge. Shortages of food and fuel, and a steady escalation of cost made it increasingly difficult to earn a living. “It is almost impossible to work,” Debussy wrote, “to tell the truth, one hardly dares to, for the asides of the war are more distressing than one imagines. I am just a poor little atom crushed in this terrible cataclysm.” Yet, Debussy took heart and began to compose more than he had in years. These works, among them En Blanc et Noir for two pianos, Douze Études composed and dedicated to Chopin, the Sonata for flute, viola and harp and the Cello Sonata are strongly affected by the war. Debussy wrote to a friend, “these works were created not so much for myself, but to offer proof, small as it may be, that French thought will not be destroyed…I think of the youth of France, senselessly mowed down…What I am writing will be a secret homage to them.” The Sonata for violin and piano of 1916/17 was Debussy’s last completed composition, and below his name proudly appeared the telling signature “musicien français.”
Debussy’s last surviving musical autograph, a short piano piece, was presented as a form of payment to his coal-dealer, probably in February or March 1917. The bombardment of Paris as part of a final German offensive commenced on 23 March 1918, two days before Debussy’s death. By that time, the composer was too weak to be carried into the shelter. Yet his perception of war had fundamentally changed. “When will hate be exhausted?” he wrote, “or is it hate that is the issue in all this? When will the practice cease of entrusting the destiny of nations to people who see humanity as a way of furthering their careers?”
Claude Debussy: Berceuse héroïque