My music
Robert Kyr: The Cloud Of Unknowing
August 25th, 2014 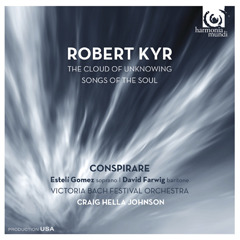 Craig Hella Johnson leads Conspirare, soprano Estelí Gomez, baritone David Farwig, and the Victoria Bach Festival string orchestra in this first recording of three choral works by Robert Kyr (b. 1952). Exploring the relationship between human and divine love, his cantatas The Cloud of Unknowing (2013) and Songs of the Soul (2011) transfixed audiences and critics alike when Conspirare premiered them. “A powerful new achievement in American music that vividly traces a journey from despair to transcendence” (The Wall Street Journal, concert review)