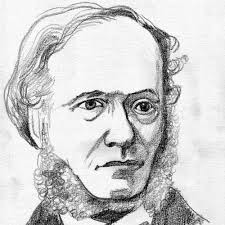 In 1843, César Franck began work on his first non-chamber work, the oratorio Ruth. The libretto by Alexandre Guillemin is inspired by the biblical “Book of Ruth” and arranged in the manner of an operatic text. In fact, the three-part division of the text corresponds closely to the three acts of an opera. However, with its musical language seemingly inherited from late French Classicism, the work did not appeal to Romantic Paris. Critics called it “artless and simplistic,” and Franck revised the score in 1860 and published the work in 1871. Resuscitated for a benefit concert to aid victims of a recent fire, the reworked version generated an enthusiastic response. A critic wrote, “M. César Franck’s Ruth will live! It must be heard, acclaimed again and often, in Paris and in all centers of art…it must be heard for the honor of our country’s symphonic music.”

César Franck: Ruth
The Symphonic Variations date from the last period of Franck’s creative activity. The composer explained that the piano should not be considered the soloist, but is simply one of the main elements of the orchestra. Uniquely, Franck introduced two very short themes, one in the strings and the other in the piano. Both themes are individually varied and progressively intermingled until they combine in a cheerful dance in the concluding variation. First performed on 1 May 1886, the composition was described as “one of Franck’s tightest and most finished works,” “a superb blending of piano and orchestra,” and “a flawless work and as near perfection as a human composer can hope to get in a work of this nature.”

César Franck: Symphonic Variations
In the “Organ Symphony” the pipe organ replaces the orchestra, but nevertheless imitates orchestral tone color, texture and symphonic processes in various movements. The genre is closely associated with French composers working in the later parts of the 19th century, with César Franck credited with composing the first French organ symphony. The “Grande Pièce Symphonique” is the musical DNA for the evolution of the genre. Inspired by Beethoven’s formal structure, the work navigates between mysticism and sensuality. There was general astonishment and “the muddled polyphonic chords were terrifying,” when Franck first played the work at Saint-Eustache. “Grande Pièce Symphonique” served as the springboard for Charles-Marie Widor, Louis Vierne, Jean Guillou and André Fleury to further cultivate the genre.

César Franck: 6 Pieces, Op. 17, No. 2 “Grande Pièce Symphonique”
The ultimate key to understanding the music of César Franck is found in his personality. Described as “a man of utmost humility, simplicity, reverence and industry,” his student Louis Vierne wrote in his memoirs that Franck “showed a constant concern for the dignity of his art, for the nobility of his mission, and for the fervent sincerity of his sermon in sound; Joyous or melancholy, solemn or mystic, powerful or ethereal.” Franck’s “angelic” personality is beautifully reflected in his solo songs. Ranging from the charm and musical resourcefulness of his early years to the steadfast melodies supported by a chromatically falling and rising accompaniment, Franck fashioned exquisite miniatures of mystical beauty.