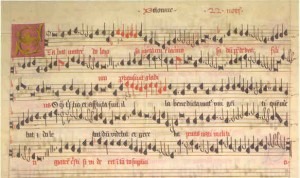 A recent article in The Guardian which asserts that musical notation (i.e. the dots, lines, squiggles and marks on a written or printed page) is “a cryptic, tricky language (…) that can only be read by a small number of people” has provoked a lively debate across social media in blogs, tweets and online discussions. The author of the article infers that the ability to read music is elitist because notation is unintelligible except to those who are privately educated.

In fact, the ability to read music is no more elitist than the ability to read English or Spanish or comprehend simple HTML coding. All are skills which can be taught, and taught well, so that students learn and absorb them. Music is a language, with its own grammar and punctuation marks, which can be taught in a way not dissimilar to the teaching of any other language or code.

The organisation of music into a standard system of signs and symbols began in the Medieval period in Europe, part of the Catholic church’s desire for ecclesiastical uniformity. Plainchant melodies were notated so that the same chants could be used throughout the church. Musical notation developed further in the Renaissance and Baroque periods, by which time it was codified into a system of signs and symbols which is familiar to us today. But musical notation does not stand still, and while the system we have today is still largely based on that which was standardised during the Baroque period, new technology has enabled notation to continue to develop, with some modern composers such as Stockhausen, Xenakis, and Penderecki using visual symbols or “graphical notation”. Today there are also a number of computer-based score-writing programmes, such as Sibelius. And musical notation is by no means confined only to classical music – it is used in rock and pop, jazz and folk music. 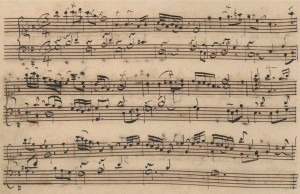 I can’t remember when I first learnt to read music. I must have been around 5 or 6, as that is when I first started piano lessons, and at that time (early 1970s) I was probably taught in a very traditional way (I did music theory homework every week alongside my piano practise). But the method clearly worked as by the time I reached Grade 5 at the age of about 10, I was sufficiently confident in my music reading to start exploring beyond the confines of the piano grade syllabus. I was also a proficient and voracious sight-reader (a skill which I have fortunately retained, but one which must be practised regularly). Being able to read music well unlocked an amazing door into a world of adventure and exploration – just as being able to read and understand English well did too. As my pianistic skills advanced, so did my reading and pretty soon great thickets of notes or music written across three staves (such as in Debussy’s Preludes – pieces I played regularly as a teenager) became something with which I could engage and enjoy.

The young people, and adults, whom I teach and have taught will all say that one of the primary motivations for learning the piano is also learning to read music. One of my students really put his finger on it recently when he said “I want to be able to read music well enough so that I can open a book of music and play anything I want to” (observe his piano teacher whooping inwardly for joy – because this is my aim too!). This student could appreciate that the ability to read music offers the possibility for independent learning and exploration.

Learning to read music really isn’t that difficult: musical notation certainly has fewer quirks and anomalies than the English language, and its “rules” and “grammar” are largely unchanging, which makes it a language which is pretty universal. Some will argue that one does not need to be able to read music in order to appreciate or understand it, and while this is true up to a point – a great deal can be gained from listening to music, reading about it and discussing it with others – the ability to read musical notation offers one the chance to get to the nuts and bolts of the music, and really tap in to the composer’s intentions. Notation is an important key to unlock the structure, architecture and narrative of the music, and it means we can look at original autographed scores by composers like Bach or Mozart or Schubert and actually read and understand them. Notation allows us to transcribe – or translate, if you will – music from other cultures, thus giving us the opportunity to experience and share this music within a familiar set of symbols and parameters. The ability to read music enables us to play together in orchestras and bands, sing in choirs, read a jazz lead sheet, accompany one another, and the end result is “organised sound”, or what we call “music“. It’s an efficient system and a common language understood by many, but it’s not just about communication: it is also part of musical creativity, inter-cultural and inter-artistic exchange, and is not confined only to “classical” music. 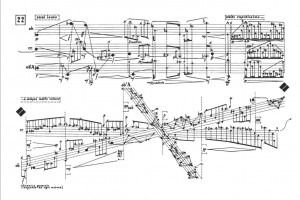 I encourage my piano students to see the musical score as a “road map” which will take them on a wonderful journey of discovery, and before we play a single note of a new piece, we spend a good deal of time looking at it and “reading” the score. Every sign and symbol is examined and discussed – what does this mean, what might the composer have intended by using that sign? I do this with my own musical study – because all those details have meaning within the overall structure and intent of the piece. Even if one is not a particularly proficient reader of music, the way a written score is organised clearly indicates things like pitch (whether notes go up or down), silences (rests), or velocity, and there are additional signs and markings to indicate tempo, expression, articulation, character and so forth. These signs are also the jumping off point for further musical interpretation and exploration, based on one’s knowledge of other music by the same composer, or music of the same period or genre, and thus the signs and symbols can fuel the imagination to create really distinctive music.

“notation is a beautiful thing in its own right, a way of communicating ideas based on a common understanding and not something just for the privileged”
– Marc Yeats, composer

In teaching notation, I think we need to dispel “the myth of difficult” – that is, if we tell people that something is difficult before they begin, the difficulty is inculcated in them from the outset and the task seems that much more onerous/impossible. Many people can’t read music because they don’t believe they can, that it is simply too difficult for them to grasp: they have been peddled the idea that it is “difficult” by peers, parents, teachers and such a negative, defeatist attitude convinces them that they won’t be able to do it. But good, intelligent, and positive teaching can turn learning to read music into a valuable and practical tool which gives access to a common language, develops fully rounded musicians, and sets us on a wonderful voyage of discovery.