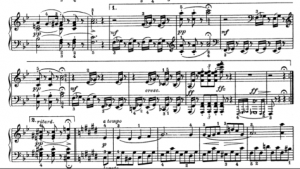 Whether or not to meticulously observe the exposition repeat in Schubert’s final piano sonata No, 21 in B-flat major, D960, is a question which continues to trouble pianists, musicologists and listeners alike. The debate concerns aspects such as authenticity, personal taste, prevailing musical fashion, and timing. When I first started learning the D960, I did not doubt the correctness of adhering to the score and repeating the exposition: throughout my childhood musical studies, I had been taught to trust the composer’s intentions, that composers know what they are doing, and that repeats are there for a reason.

In Baroque repertoire, sectional repeats are commonplace, often used to reinforce material and to offer soloist and/or ensemble the opportunity for some interesting extemporisation or ornamentation in the repeated material. At a harpsichord masterclass I attended at Handel House Museum in London with some of my students, the harpsichordist encouraged students to experiment with different effects in repeats, such as using the upper manual of the harpsichord, or employing a lighter touch. Bach and his contemporaries would have expected and encouraged this.
In the piano sonatas of Mozart, for example, a repeat of the exposition in the first movement is often a reinforcing device, a reminder that this is a sonata, in Sonata Form (Exposition, Development, Recapitulation). And Mozart would also have expected his keyboard player to offer some extemporisation – changes in dynamics, ornamentation and so forth – in a repeat. As musicologist, pianist and noted Mozart scholar Robert Levin states:
“If you take a repeat, for instance, heaven forefend you should play exactly the same way you did before. It’s like telling somebody, ‘Look, if you could go back five years and relive your life would you change anything?’
Some people might say, ‘Nah, I think I basically did what I wanted to do,’ but a lot of people would say, ‘Oh boy. I can name you a dozen things that I would do differently.’ A piece of music is an almost cinematic opportunity to revisit a situation and reinterpret it.”
In a repeat of the exposition, the musical experience does not stay the same – there can never be a “straight repeat” because we are human and do not seek to replicate MIDI recordings – but the repeat of the same material helps the listener to assimilate the musical ideas expressed in the composition, and makes it easier to comprehend the structure of the piece. 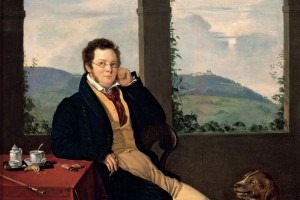 In Schubert’s last sonatas, the repeat sign is written for an exceedingly long exposition, while the material of the exposition is repeated a third time in the recapitulation with little alteration. This has led some pianists to omit the exposition repeat in performance, often for temporal rather than musical reasons (these are big sonatas, lasting around 40 minutes each in performance). The practise of ignoring the repeats seems to have developed in the mid- to late-nineteenth-century, and by the early recording age, such repeats were omitted because of limited recording roll or disc space.
In the last Sonata (and, indeed, in the penultimate Sonata, No. 20 in A, D959), the first ending of the exposition contains unique material, leading the music back to the movement’s opening. If the music is performed without the repeat, this material is missed out completely (if one does not observe the repeat, one goes straight to the second time bar and thence to the development section). These bars contain striking material, which does not appear anywhere else in the piece, and is significantly different from the second ending. When the exposition ends a second time, Schubert introduces an extraordinary bridging section, three ethereal chords a single bar, which seem to come from somewhere else completely, and lead the music into darker, minor-key territory. As David Montgomery states:
“Listeners who are not given the second chance to sort out one of Schubert’s great harmonic journeys…..through an exposition repeat, have not only been misguided by the player, but actually deprived of a major roadsign”
(David Montgomery – ‘Franz Schubert’s Music in Performance’, Pendragon Press, 2010)
British-Hungarian pianist Andras Schiff feels that the omission of the exposition repeat is as “the amputation of a limb” (Schiff, “Schubert’s Piano Sonatas”), while Alfred Brendel declares the exposition repeats in the final two sonatas to be “unimportant”, that the transitional bars in the D960 are too unconnected to the rest of the movement, and that their omission actually contributes to the coherence of the piece. Brendel also states that “repeat marks must not be taken as orders to be automatically obeyed, as if the repeatable section were written out by the composer.” (“Schubert’s Last Sonatas: An Exchange”; Frisch and Brendel). But the last two sonatas have more than mere “repeat marks”: the bars of music specifically written out by the composer suggest that Schubert requires the repeat to be observed.
In reading reviews of live performances of Schubert’s last three sonatas, it strikes me that many pianists omit the exposition repeat/s simply to save time. Most concerts last around 90 minutes (plus interval); any longer and the audience starts to get restless, worrying about last trains etc. Critics, who praise the omission of the exposition repeat, are similarly impatient, presumably keen to get out of the Wigmore and into the pub before last orders!
Played in its entirety, with all repeats intact (including in the third movement Scherzo), the D960 comes in at around 40 minutes. Another aspect which relates to this is the tempo of the first movement. It is marked Molto Moderato, and in some pianists’ hands (Richter, for example), this can verge on Adagio! Moderato means “not rushing or dragging”, and Schubert also used the German term mässig, implying the calm flow of a measured allegro. A quick glance through recordings of this work reveals that most versions which include the repeat come in at around 20 minutes; Richter’s is 25 minutes, while Pollini’s is 18 minutes. At this length, the opening movement of the D960 is as long as an entire sonata by Haydn or Beethoven.
To my mind, a well-played opening movement of the D960, with repeat, need not feel unnecessarily long. The music has a spaciousness which is offset by a considered interpretation of the Molto Moderato marking. I particularly like Maria Joao Pires and Mistuko Uchida in this work. I have enjoyed all three sonatas in a single concert, or the D960 on its own, preceded by one of the D899 Impromptus in a lunchtime recital. Both programmes work equally well.
Here is Maria Joao Pires
Schubert: Piano Sonata No.21 in B flat major D960: I Molto moderato