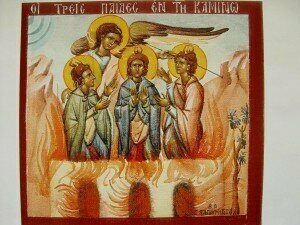 Youths in the Furnace

For a number of scholars, Karlheinz Stockhausen’s Gesang der Jünglinge (Song of the Youths) is “the first masterpiece of electronic music.” It was premiered in the large auditorium of Cologne’s Westdeutscher Rundfunk on 30 May 1956. The subject of the story is rather grim. The “Youths” mentioned in the title are Shadrach, Meshach, and Abednego, three Hebrew men mentioned in the third chapter of the Book of Daniel. King Nebuchadnezzar, the king of Babylon, threw the youths into a fiery furnace when they refused to worship him as a god. Miraculously, the youths are unharmed and sing praises to God. To his surprise, Nebuchadnezzar sees four men walking the flames, “the fourth…like a son of God.” 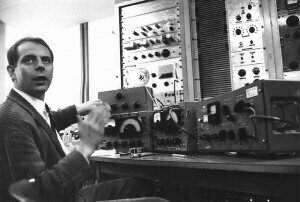 In 1954, the devout Catholic Karlheinz Stockhausen started work on a Mass for electronic sounds, which he intended to debut in Cologne Cathedral. Church authorities apparently deemed loudspeakers inappropriate for the cathedral space, and forced to rethink his plans, Stockhausen transformed his initial concept into a non-liturgical religious work. With his Gesang der Jünglinge, Stockhausen produced a unique synthesis of vocal and electronic sounds.

“It integrates electronic sounds with the human voice by matching voice resonance with pitch and creating sounds of phonemes electronically.” I think that means that sung vowels in their overtone structure resemble pure tones, whereas consonants resemble noises. Stockhausen still had to create additional elements to fill the continuum, and in this way brought together purely electronically generated music with the transformative recordings of acoustical events. The text is presented on a scale of seven degrees of comprehensibility, and “whenever language emerges momentarily from the sound signals of the music, it praises God.” During the period from 1954 to 1956, Stockhausen was struggling to establish his career, and “I myself was a youth in the fiery furnace,” he once remarked.