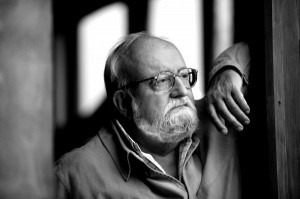 One of the most versatile, multi-faceted and stylistically diverse composer of modern times, Krzysztof Penderecki was born 23 November 1933 in Dębica, Poland.

After initially taking private music lessons, Penderecki enrolled in the State Higher School of Music in Kraków; an institution subsequently renamed “Academy of Music”. Upon graduation in 1958, Penderecki became a member of the faculty, and in 1972 he was appointed rector. In 1959, Penderecki submitted, under different pseudonyms, several compositions in a national competition organized by the Polish Composer’s Union. To his surprise, three of his works — showing the serial influences of Anton Webern and Pierre Boulez — won first prize. Penderecki scored his international breakthrough in 1960, with a composition originally entitled 8’37”. Scored for 52 string instruments using unconventional performance techniques, it was quickly described as the most extensive elaborations on the tone cluster. When Penderecki first heard the composition in performance, he was “struck by the emotional charge of the work”, and he began to search for associations. In the end, he decided to dedicate the work to the civilian victims of the US nuclear attacks on Japan, and affixed the title “Threnody to the Victims of Hiroshima”. In 1962, Penderecki produced what is generally regarded as his most provocative and controversial musical statement, the highly experimental and decadent composition “Fluorescences,” which essentially destroyed the classical orchestra.

Penderecki quickly realized that he had come to the end of the road, and that he could not continue in this particular compositional style without repeating himself. According to the composer, “I had to go and find other ways to write music.” Slowly, his compositions underwent a process of evolution that initially emerged in the “Stabat Mater” — a composition that returns to sixteenth-century polyphonic conventions — and eventually culminated in the “St. Luke Passion”. Combining various different musical styles — essentially summarizing everything Penderecki had written in the early sixties and late fifties — the composition is nevertheless balanced by an overarching Baroque form and the famous BACH motif. The motif is serially derived from one of the tone rows and functions as a bridge between the conventional and more experimental aspects of his changing style. The work surprisingly concludes with a triumphant E-major chord, the only tonal harmony in the entire composition.

While Penderecki was serving as professor of composition at the Yale School of Music in the mid-1970’s, his music continued to evolve. He began to experiment with traditions, and rediscovered Anton Bruckner. “Paradise Lost”, composed for the Chicago Lyric Opera, the “Symphony Nr. 2” — which frequently uses the tune of the Christmas carol “Silent Night” — and the “Violin Concerto Nr. 2” clearly constitute a continuation of the Romantic tradition. Until today, Penderecki has continued to write in the Post-Romantic idiom, finishing his “Polish Requiem”, which began as a memorial to the victims of the Polish anti-government riots in the 1970’s and 80’s, in 2005. Although it still contains elements of Penderecki’s early music — a clear musical synthesis of his evolving styles as a composer — it is the work of a mature master. This fertile exploration of traditional musical language has continued to yield rewarding works well into the new millennium, and includes four operas, nine symphonies and other orchestral pieces, a variety of instrumental concertos for an even larger variety of instrumental combinations, choral setting, as well as chamber and instrumental works.


Of course, he has received numerous awards and prizes, and continues to take more commissions than he can realistically hope to complete. For Penderecki, music is a fundamental and essential part of the human condition and the preeminent form of non-verbal communication. He began writing music when he was six or seven, and since then, his whole life as an artist has been a never-ending search for self-expression. This search continues, as he still writes music every day. It’s like a drug he says, “I simply must have it”!

Read our memorial tribute to Krzysztof Penderecki to know more about his contributions to the world of classical music.