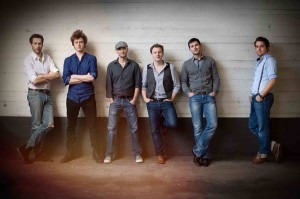 The energy with which Balkan folk music is infused is infectious, driving, compelling. Couple this with the fireworks of a world-class saxophone quartet, accordionist, and drummer, and you have the recipe for a band bubbling and brimming with an inimitable creative spark.

SIGNUMfive is an offshoot of the SIGNUM Saxophone Quartet, described by tenor sax player Alan Lužar as its ‘baby brother’. This would imply a certain tentativeness in their approach, but this is far from the truth: the saxophone quartet, teaming up with accordionist Nikola Djorić and drummer Volker Reichling have a sound world charged with a unique sonority, as heard on their recent album Balkanification.

All but one track hail from the Balkans, the group exploring their own fusion of traditional folk music with contemporary Western styles. For Alan, the album gave the group a chance to show the many shades of colour and emotion this often misconceived folk music possesses. ‘This kind of music isn’t pounding all the time,’ he explains. ‘There’s definitely a challenge for us to shape it.’

Much of the music on the album was improvised around by the group itself, leaving the classical tradition of learning a piece from sheet music at the door. ‘We improvise a lot in rehearsals, and if someone gets an idea we just shape a piece around that.’

With this said, all apart from Volker are classically trained – but as an ensemble consisting of saxophones, accordion, and drums, the classical performance space is often untrodden ground, something which the group is aiming to change: the work of both SIGNUM and SIGNUMfive sees them performing in spaces reserved for more traditionally ‘Classical’ (with a capital C) events. However, since the quartet’s inception in 2006, and the subsequent birth of SIGNUM five in 2012, they’ve entertained not just concert halls, but casinos, banks and outdoor festivals.

The genesis of SIGNUMfive came after Alan moved to Germany to play with the quartet. Remembering his student days in Vienna, where he met and played with Nikola, prompted the quartet to invite Nikola to Cologne to play together. 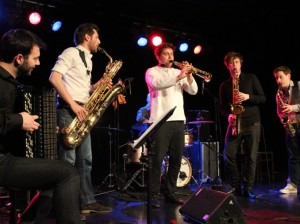 And it didn’t stop there. It was only a matter of time before they joined forces with drummer Volker, and their first concert in this setup was in the Cologne Philharmonie – a sell-out audience of 2000 people – not a bad start.

Given the relative youth of the group, the number of engagements is smaller than that of its bigger brother: six or seven this year, as opposed to seventy. Timetabling can also be an issue: ‘It’s not easy to schedule things; Nikola is playing a lot as an accordionist, we’re playing so much this year with the quartet…’ But the recent debut album is a solid foot on the ground, testament to the younger sibling’s determination to follow in his elder’s footsteps.

In addition to the Balkan folk explored on the album, SIGNUMfive also perform arrangements of anything from Chick Corea to Piazzolla – but always devising and creating as they go.

‘In SIGNUMfive it’s quite common that we only play our own music, or music written specifically for us, just because that’s the music that fits our instruments the best.

‘When we do we feel more liberated, more cheerful, more free than when playing classical music. But we still have our high expectations when playing with SIGNUMfive – we don’t show up to the concert having drunk six beers! We try to be honest to the audience, and to ourselves.’