Features
Instrument of the Orchestra XIV: Other
by Maureen Buja August 24th, 2015 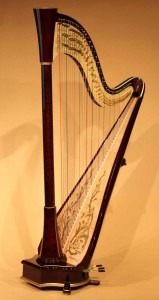 Now that we’ve had a complete tour of the orchestra with a look at all the principal instruments, we can do one last look at the rarely-used instruments that are called for by composers.

In the strings, we have the harp, which only entered the orchestra when it could be tuned chromatically. This is done through the uses of pedals that help change the fundamental pitch of a string. The harp entered in the orchestra in the 1880s and its use in Franck’s 1888 Symphony in D minor was considered revolutionary. 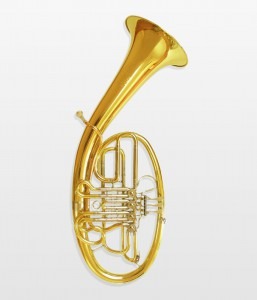 In the brass world, we have the Wagner Tuba, a lower-brass instrument that combines elements of the French horn and the trombone. The instrument was created for Wagner’s Ring Cycle, and has also been used by Anton Bruckner and Richard Strauss. Wagner was looking for a sound for the Valhalla motive that had the nobility of the trombone, but with a less direct tone, like a horn. 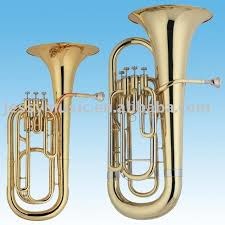 Euphonium and a Tuba

The musical world in Paris in the 19th century was full of competing musical instrument makers and one of the most active was Adolf Sax. He invented the Saxophone and the Saxhorn, knowing that if he could get these instruments into the French Army Band, his fortune would be made. The Saxhorn fell by the wayside, defeated by the trombone but the Saxophone is still with us today and is an occasional orchestral instrument. 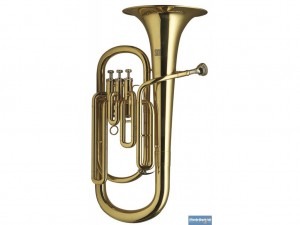 The Saxhorn was particularly important in band music in the mid- to late-19th century as this image of the 10th Veteran Reserve Corps, taken in April 1865 shows. Sax originally made 8 different sizes of saxhorn, from sopranino to contrabass and we see many of them in this picture. What you might also notice is that these instruments were designed to face backwards, since civil war army bands typically marched in front of the army and the sound need to project backwards. 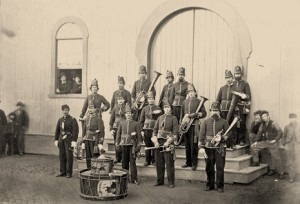 The saxophone, on the other hand, is occasionally needed as an orchestral instrument. In Ravel’s orchestration of Mussorgsky’s Pictures at an Exhibition, it is the melancholy sound of the saxophone that he uses to draw “The Old Castle.”

Mussorgsky: Pictures at an Exhibition (orch. Ravel): II. The Old Castle (New Philharmonia Orchestra; Charles Mackerras, Conductor)
The Cimbasso is a bass brass instrument used in the operas of Verdi and was also used by Respighi in The Pines of Rome. The tuba player or a trombone player can double on this instrument when needed. 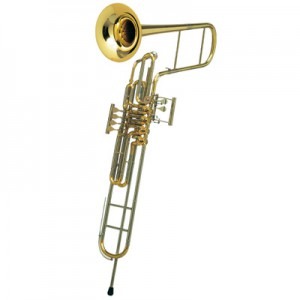 Also in the brass we have the occasional use of the Ophicleide. This instrument was invented in 1817 by the French maker Asté. In the Romantic orchestral, it was an important part of the bass section, but it was very difficult to play and has now been replaced by the trombone and tuba. One use of it in modern recording was Roger Norrington’s 1988 recording of Berlioz’ Symphonie fantastique used them and when you compare recordings, you can hear their much rougher sound. Listen to the Norrington recording at 03:24 for the entry of the ophicleides.

Berlioz: Symphonie fantastique: V. Songe d’une Nuit du Sabbat (London Classical Players ; Roger Norrington, Conductor)
Electronic instruments have also made their appearance in the orchestra, most notably the Ondes Martenot, invented in 1928 by French cellist Maurice Martenot. Much of its use in orchestral music has been by French musicians, largely because it’s only in French conservatories that the instrument is taught. 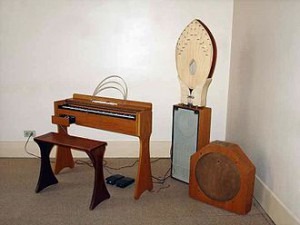 Varèse: Ecuatorial. (Thomas Bloch, ondes martenot; Camerata Silesia; Polish National Radio Symphony Orchestra; Christopher Lyndon-Gee, Conductor)
This is by no means any more than an overview of the “other” instruments that might be used in an orchestra. Orchestral music has been written for many centuries and instruments fall in and out of fashion and, hence, fall in and out of the orchestra. Keep an eye on the wind and brass players as they have more kinds of instruments they might be playing!