The first printed version of the charming children’s book Mother Goose’s Melody was published in London around 1765. It contained several nursery rhymes that have not stood the test of time, but many others are still familiar such as “Rock-a-bye baby.” The 1765 edition sported the following lyrics: 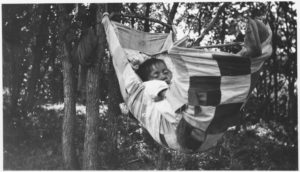 Baby sleeping in a swing suspended between trees

The lullaby context seems fairly obvious, and there is a theory suggesting that it was the first English poem written on American soil. Supposedly, it may have been written by an English colonist who observed the way Native American women rocked their babies in birch-bark cradles, suspended from the branches of trees. In American editions “Rock-a-bye” replaced the original opening phrase, and a number of tunes became associated with these early rhymes. Together with the now-familiar tune it achieved great popularity, but as you can hear in Edvard Grieg’s version, a number of variants appear to have existed across Europe.

Little Jack Horner
Sat in the corner,
Eating his Christmas pie;
He put in his thumb,
And pulled out a plum,
And said, “What a good boy am I!”

A substantial number of readings have been associated with this rhyme, and a 19th century interpretation suggested that it was composed as a satire in reference to the actions of Thomas Horner in the Tudor period. Thomas Horner was steward to the last abbot of Glastonbury before the dissolution of the monasteries under Henry VIII. Before the destruction of the abbey, the abbot sent Horner to London with a huge Christmas pie containing the deeds to a stately manor house. Horner supposedly opened the pie and kept the manor property for himself. Such a naughty boy!

One of the most beloved characters in English nursery rhymes is “Humpty Dumpty.” Often portrayed as a ginormous egg, the first recorded versions of the rhyme and the tune date from the late 19th century:

As you may know, several theories have been advanced to suggest original meanings. “Humpty Dumpty” might have referenced King Richard III, who was depicted as humpbacked in Tudor history, or seen as a metaphor of the downfall of Cardinal Wolsey. “Humpty Dumpty” has also been described as a siege engine, or attributed to a cannon used from the church of St. Mary-at-the-Wall by Royalist defenders in the siege of 1648. The story goes that a large cannon called Humpty Dumpty was strategically placed on the wall, but a well-aimed shot by Parliamentary forces damaged the wall beneath Humpty Dumpty, causing the gun to fall. All subsequent attempts to raise the cannon on another part of the wall failed.

The nursery rhyme “Old Mother Hubbard” was first printed in 1805 and became one of the most popular publications of the 19th century. The first verse reads: 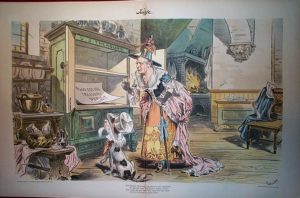 The verse is believed to be a political commentary, with the suggestion that the rhyme refers to Cardinal Thomas Wolsey refusing Henry VIII’s divorce from Catherine of Aragon. A different reading was suggested in the United States, as it was applied to the 1897 treasure deficit. The cartoon showed President William McKinley as Old Mother Hubbard, and her dog as an unhappy Uncle Sam.