Composers Anecdotes
“London Bridge is Falling Down”
All About Nursery Rhymes and Not BREXIT
by Georg Predota October 30th, 2019 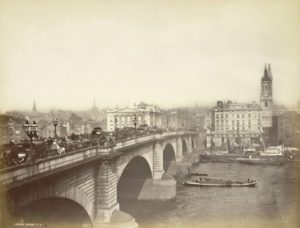 Nursery Rhymes have always been popular with children and adults alike. These rhymes come from a variety of sources, including traditional riddles, proverbs, ballads, drinking songs and historical events. There has been much debate whether these innocent sounding rhymes have on occasion darker hidden meanings or origins. Or is it possible that they simply served as educational tools and for entertainment? Whatever the case may be, let’s look at proposed background meanings to some of the most beloved nursery rhymes and musical rounds starting with the “London Bridge is Falling Down.” Although there is considerable variation in the lyrics of the rhyme, the most frequently used first verse reads: 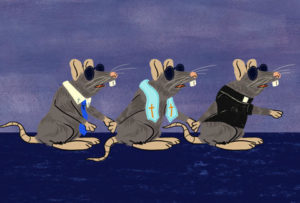 Apparently, there is no clear-cut meaning the rhyme is meant to convey. However, several theories have been proposed, including the suggestion of the supposed destruction of London Bridge by Olaf II of Norway in 1014. Viking invasion notwithstanding, there is also a theory that the song refers to the burying alive of children in the foundations of the bridge as human sacrifices. And numerous attempts have been made to identify the “fair lady.” Sounds all pretty serious, so composer Bruce Adolphe took Chopin’s musical style and blended in the old nursery rhyme in what has been called “the wittiest and funniest musical parodies imaginable.”

The ever-popular “Three Blind Mice” date back to 1609, when Thomas Ravenscroft published the first version.

It has been suggested that the three blind mice were actually Protestant noblemen living during the reign of Queen Mary I of England, who was better known under her nickname “Bloody Mary.” Queen Mary was a devout Catholic, and the “Three Blind Mice,” so it has been told, became known as the Oxford Martyrs (Anglican Bishops), as they were tried for heresy and burnt at the stake in 1555. Believe it, or not. 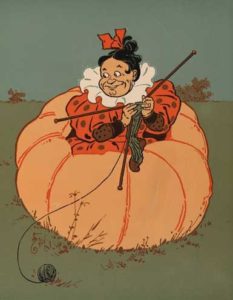 The oldest surviving version of “Peter, Peter Pumpkin Eater” dates from around 1797, and it also appears in the Mother Goose collection printed in Boston around 1825.

Peter, Peter pumpkin eater,
Had a wife but couldn’t keep her;
He put her in a pumpkin shell
And there he kept her very well.

This rhyme appears to have some rather sinister connotations. Supposedly, Peter had married a lady of the night, but when he got tired of her extra-curricular activities, he murdered her and hid her body in a hollowed out pumpkin. An alternate reading suggests that the rhyme refers to the 13th-century English King John. Supposedly, he bricked the wife of a rebellious noble into a wall and thereby starved her to death. 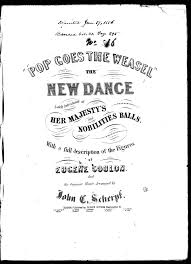 “Pop Goes the Weasel” is enormously popular on both sides of the Atlantic. The English version of the rhyme seems to have originated in the 18th century, and the tune appears to have started as dance music around 1853. By 1855 it is described as a “universally popular song but with senseless lyrics.”

The song crossed the Atlantic in the 1850’s, and significantly different lyrics were added. One of the most popular current versions reads:

Because of the obscure nature of the various lyrics, nobody really knows what “Pop! Goes the weasel” actually means. It has been suggested that it represents a tailor’s flat iron, a dead weasel, a hatter’s tool, a spinner’s weasel used for measuring in spinning, a piece of silver plate, or that it references Cockney rhyming slang meaning to eat or drink something. It also might stand for pawning a coat, and the monkey on the table is a demand for payment or a mortgage.

Richard Rodney Bennett: Over Hills and Far Away, “Pop goes the Weasel”