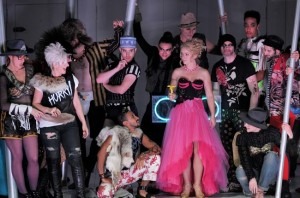 At the Ball (Staatsopera under den Linden, Berlin)

A New Year’s Eve tradition in the opera world is Johann Strauss II’s operetta Die Fledermaus (The Bat). A year earlier, Eisenstein abandoned his friend Falke in center of town, drunken and dressed as a bat (hence the title), and this year, Falke wants to get his revenge. There’s a ball at Prince Orlofsky’s and everyone wants to go, including Eisenstein’s maid Adele.

Eisenstein has lost a court case and has to spend 8 days in jail, but first he wants to go to the ball. After he leaves, his wife, Rosalind, entertains her former lover Alfred. Frank, the governor of the prison, arrives to take away Eisenstein, but takes away Alfred instead.

Strauss II: Die Fledermaus: Overture (Bavarian State Orchestra; Carlos Kleiber, cond.)
In Act II, at the ball, Falke arranges it that Eisenstein, his friends, and his wife are in disguise and so the comedy starts: Eisenstein is presented to his wife who is in the guise of a Hungarian countess and he is introduced to his maid who is dressed as an actress. She responds with ‘Adele’s Laughing Song.’ 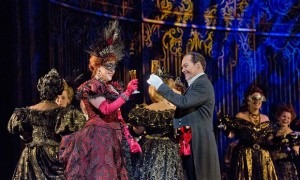 He also meets Frank who is ‘Chevalier Chagrin.’ Eisenstein, as ‘Marquis Renard,’ seduces the Hungarian countess while she steals his watch as evidence of his wandering. She sings a Hungarian czárdás to entice him. 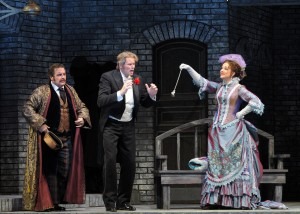 The ball ends at 6 am and Eisenstein and the governor go off to the prison.

Act III, at the prison, begins with a spoken-word set piece for the drunken jailor Frosch, who has taken advantage of the governor’s absence to make his own celebration. In modern productions in houses such as the Met, the spoken monologue by Frosch has been performed by real comics, including comedians Jack Gilford, known for his work in A Funny Thing Happened on the Way to the Forum, Sid Caesar, and Dom DeLuise. Eisenstein and the governor of the prison enter with Frank still drunk, Adele arrives, Rosalinde wants to divorce Eisenstein, and all is tumult until Falke arrives with the rest of the people from the ball and everything is cleared up…except that Eisenstein still has to do his 8 days in jail.

One brilliant piece is the ‘monodram’ spoken by Frank at the beginning of Act III, where he’s wandering around drunk, running into things, and singing and whistling music from the ball. 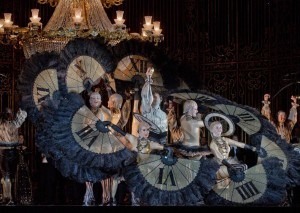 Although it was given its premiere in April 1874, the opera has become a New Year’s staple, primarily because of the grand Act II ball scene, and the fact that all of the problems through the entire opera come from or are blamed on drinking – no jealous murders, no crazy brides, just the usual problems that come from a big party.