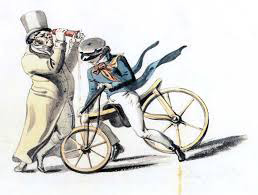 In April 1817, a merry little band of artists decided to form a small private club called the “Unsinnsgesellschaft” (Nonsense Society). Based in Vienna, this congenial group of artistic friends published a weekly magazine, the “Archiv des menschlichen Unsinns” (Archive of Human Nonsense). The newspaper is full of allusions to political events and features humorous and bawdy texts bothering on the obscene. Essays cover a variety of topics including literature, science, and politics, and are interspersed by watercolors and caricatures drawn by club members. Publishing newsletters with a distinct intellectual, an erotic and often dangerous political undercurrent was risky business! In the aftermath of the French Revolution and the Napoleonic Wars, Austrian police was highly suspicious of any gathering of students, youth, intellectuals and artists. And it was certainly not uncommon for artists to be arrested on suspicion of revolutionary activities by the Austrian secret police.

The Nonsense Society had twenty-two regular members, and since none of them wanted to be arrested, they gave each other humorous nicknames. The young painter August Kloeber, who had sketched a famous Beethoven portrait, was called “Goliath Pinselstiel” (Giant Paintbrush), while Johann Nepomuk Hoechle went under the name “Kratzeratti Klanwinzi (Little Scratcher). The three Kupelwieser brothers, Josef, Johann and Leopold, were identifies as “Blasius Leks,” “Chrisostomus Schmecks,” and “Damian Klex;” nicknames that have rather naughty meanings in local Viennese dialect! And the name “Ritter Cimbal” identifies Franz Schubert, who according to the actor Heinrich Anschütz was “one of the most active members of the Nonsense Society.” Schubert’s involvement is confirmed in an obituary written by Eduard von Bauernfeld, “at that time Schubert came out into the world several young men in his native city, mostly poets and painters (e.g. the esteemed Leopold Kupelwieser), gathered together, whom genuine striving after art and similarity of views soon united in sincere friendship, and into whose circle Schubert too was drawn.”

The Nonsense Society disbanded in December 1818 after having celebrated two festive events. One of them was a grand fancy dress New Year’s Eve party in 1817! That gathering was captured in a watercolor entitled “Zur Unsinniade—5ter Gesang” (For the 5th Song of Nonsense) containing the banner “Vivat es lebe Blasius Leks” (Long live Blasius Leks). And in the middle of the scene stands a short man with curly sideburns and wearing eyeglasses, who the scholar Rita Steblin has positively identified as Franz Schubert. Two young women, most probably Babette and Therese Kunz, with whom Schubert gave concerts and for whom he arranged his Overtures in Italian Style as 4-hand piano pieces, wearing formal white dresses and blue accessories accompany him. The painter Ludwig Kraißl plays the violin, and according to Steblin “heralds the arrival of the musical genius Schubert, who is placed so prominently in the center of the picture.” And Schubert seemingly composed music for the Nonsense Society as well. Apparently, the four act drama Der Feuergeist, containing choruses, machinery and flying objects was set to music by Schubert, who reused some of the musical material in his opera Die Zauberharfe (The Magic Harp). And the celebrated male quartet “Das Dörfchen” (Tiny Village), unequivocally composed for the Nonsense Society references a fellow club member, Ferdinand Dörflinger. Other settings, including “Der treue Ritter” (The faithful Knight), appear to be self-referential as it accords with Schubert’s own nickname in the society. The ideas behind the Nonsense Society might reasonably have served as the inspiration for subsequent artistic gatherings called “Schubertiade.” Be that as it may, nonsense never goes out off style, and it certainly pays to keep this in mind. Happy 2017!