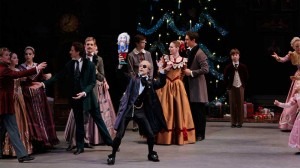 The Arrival of the The Nutcracker (New York City Ballet)

From its first notes, Tchaikovsky’s ballet The Nutcracker takes us to someplace warm and magical.

Tchaikovsky: The Nutcracker, Op. 71: Overture (Berlin Philharmonic Orchestra; Simon Rattle, cond.)
The ballet originates in a story by E.T.A. Hoffmann, The Nutcracker and the Mouse King, where Marie is given a nutcracker and after it’s broken, puts it to rest in the bed of the doll Clara.

Later, the dolls and Marie’s brother’s tin soldier come awake to battle the mice. The doll Clara helps the Nutcracker ready for battle. The entire description of the battle itself is done in military style:

During the hottest of the fight, large masses of mice cavalry had debouched softly from under the settee, and amid loud and hideous squeaking had thrown themselves with fury upon the left wing…. Slowly…the china figures advanced, headed by two Chinese emperors, and formed themselves into a hollow square…

And so the battle rages on, with one bold move from the mice resulting in one of the Chinese emperors losing his head, literally. Marie saves the toys with a strategic throw of her slipper that disperses the mice army. Marie falls into a swoon, and in true 19th century romantic style, is confined to her bed until she is better. Her Godfather Drosselmeier comes and seems to know all about the battle and then tells her The Story of the Hard Nut, the backstory of The Nutcracker family. In the story The Nutcracker, named Drosselmaier, saves an ensorcelled princess but is made ugly in the process and she won’t marry him because he looks like a nutcracker with its large head, wide grinning mouth, and cottony beard. 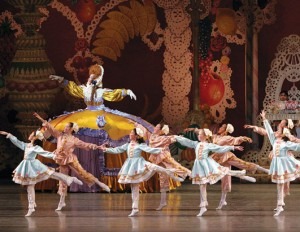 Later that night, the mouse king returns and blackmails Marie for all her sweets or else he will chew up The Nutcracker. The Nutcracker comes to life again and defeats the mouse king and takes Marie off to The Doll Kingdom. After meeting the inhabitants, Marie swoons again and finds herself back home again. In the end, Marie, thinking about the unfaithful princess of the story, tells Godfather Drosselmaier that she wouldn’t have turned away the ugly nutcracker. With that, Drosselmaier’s nephew arrives and whispers to Marie that through her faith and love, his curse is broken. They marry a year later and live in the Doll Kingdom.

E.T.A. Hoffmann’s dark tale, with its wounds and swoons, was simplified and retold by Alexander Dumas. Gone are the other children of the house, gone is the doll Clara, but we still have the backstory of The Nutcracker, and the wedding with the nephew at the end.

When choreographer Marius Petipa created the ballet for Tchaikovsky, The Nutcracker story became very simplified. Marie takes the name Clara, Herr Drosselmeyer plays an important role, but the entire middle section, telling how The Nutcracker was made, was deleted, and the Doll Kingdom became The Land of Sweets, presided over by the Sugar Plum Fairy in the absence of The Prince, who had been turned into The Nutcracker. Separate dances about sweets from around the world were added: chocolate from Spain, coffee from Arabia, tea from China, and candy canes from Russia. Then, Danish shepherdesses perform on their flutes; Mother Ginger has her children, the Polichinelles, emerge from under her enormous hoop skirt to dance; and a string of beautiful flowers perform a waltz. 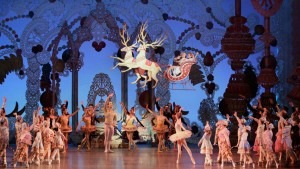 Act II Tableau 3: Waltz of the Flowers
The ballet ends with The Nutcracker (who was transformed back into The Prince at the end of Act 1) and Clara departing the Land of Sweets in a reindeer-drawn sleigh.

The Nutcracker wasn’t a success when it first opened but Tchaikovsky put together a 20-minute suite of selections from the ballet that kept it in the repertoire. In 1955, however, the ballet was revived by George Balanchine for his Ballet Society (later New York City Ballet), and it has become a Christmas season staple, both on the stage and as televised.

We’ll close with a jazz version done by Duke Ellington and Billy Strayhorn in 1960, to bring it into a swinging modern version!