In keeping with Sokolov’s insistence on releasing live recordings only, this newly released album was taken from his recital in Haydnsaal, Esterházy Palace in 2018, consisting of three sonatas by Haydn, Schubert’s Impromptus D. 935 and, as expected, a generous offering of six encores.

A behind-the-scenes video of Sokolov preparing for this recital 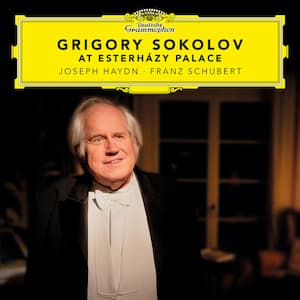 The first part of the recital was comprised of Haydn’s Sonatas in G minor (Hob. XVI: 44), B minor (Hob. XVI: 32) and C-sharp minor (Hob. XVI: 36). A magician of the keyboard, Sokolov conjured up iridescent colours from the well-prepared Steinway. Every note was clearly enunciated, at times resembling a human voice with natural deflections. The faster movements were executed with unhesitating efficiency, technical assurance (despite a few blemishes) and immaculate layering in its dynamic and tonal palette. Sokolov also took the liberty of altering some of the ornamentations (e.g. from turns to mordents, adding trills), dynamics and notes stylistically. Macroscopically, there was an overarching sense of structure in each sonata and suitable creation and release of tension, with the theatricality of the music in mind. 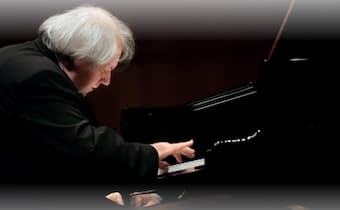 The highly nuanced playing and the plethora of tone colours from Sokolov continued to shine in the second part of the concert, where there were memorable moments of profundity and transcendence in Schubert’s Impromptus D. 935.

I tended to imagine Impromptu No. 1 in F minor, under his hands, as a yearning for love, with the episodes containing dialogues between the lower and upper registers, symbolising the conversation between a pair of lovers. The ephemeral optimism in the work, impregnated with poignancy, made up for the bittersweetness communicated by Sokolov.

Impromptu No. 2 in A-flat major was rendered as a sincere confession with remembrance, achieved by a pellucid singing tone coupled with a ravishing diversity in colours. Sokolov approached the ending with an intricate mixture of warmth, reminiscence and transcendental sorrow, which was particularly moving after the rather tumultuous middle section.

Impromptu No. 3 in B-flat major, written in the form of theme and variations, had a flowing sense of continuity while the music was naturally metamorphosising. Apart from the scintillating passagework and the deeply felt Variation III, what struck me the most was the ethereal quality he gave to the coda, as the music returned to the theme. A minor complaint, however, was that the tendency to take time before appoggiaturas in the Thema slightly disturbed the flow.

The final Impromptu shifted significantly from the first three in terms of its emotional landscape. Its Hungarian flavour was evident, although one might look for more playfulness in Sokolov’s reading of the work, marked Allegro scherzando. The dazzling runs were meticulously shaped, with his pedalling always judicious. The ending was incandescent with passion, bringing the programme to a dramatic conclusion.

As ever with Sokolov, this only marked the beginning of the “third” part of the recital – with six encores ranging from Rameau to Debussy that spanned almost half an hour. His rendition of Rameau’s Le Rappel des Oiseaux perfectly illustrated how to perform Baroque music on a piano with utmost conviction, with crystal-clear ornaments and sensitive touch. Chopin Prelude Op. 28 No. 15 in D-flat major, commonly (and incorrectly) known as “Raindrop”, reached a level of emotional intensity that was not achieved in other recordings. Meanwhile, the lesser-known Griboyedov Waltz in E minor was treated with such exquisite delicacy. Debussy Prelude Book 1 No. 6 “Des pas sur la neige” served as the final encore, transporting the audience back to reality as the last note faded away…

Watching Sokolov’s unorthodox pedalling was truly a revelation in itself. For example, he constantly adjusted the depth that the una corda pedal was applied, which accounted for the coruscating kaleidoscope of colours he was able to produce (while some pianists use it merely as a tool to damp down the dynamics). The sostenuto pedal was also wisely used in the first movement of Haydn Sonata in C-sharp minor to sustain certain notes.

He greeted the audience with a brief bow, sat down and played – nothing extra or artificial. Whenever he plays, one has the feeling that he is completely absorbed or even dissolved into the music. He shows absolute command over the keyboard, explores pianistic possibilities to the fullest and, more importantly, delves deeply into the composers’ inner worlds. His artistic integrity, unceasing pursuit of perfection, and devotion to music set him apart from his peers. As I wrote in another review – Grigory Sokolov, what a musician.

This album is released by Deutsche Grammophon on 8 April.