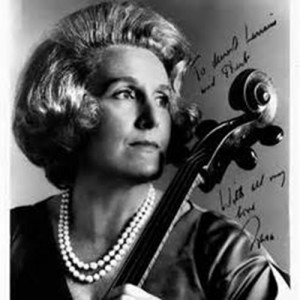 When I was a budding young cellist my father took me to play for the grand-dame of the cello, Zara Nelsova, who was in town to perform as soloist with the Toronto Symphony. She was known for her extraordinary cello sound and her sequined gowns, which belled outward, hiding layers of stiff crinolines. After her entrance she’d sit down to play flaunting a matching silk scarf that she draped with a flourish across her ample bosom.

Dad knew her from her few years, as principal cello of the Toronto Symphony in the 1940’s. Zara began playing at the age of five on a converted viola. Dad thought she’d be sympathetic, despite the fact that she played powerfully— like several men. I was, shall we say, rather diminutive—still am. Trudging reluctantly behind my dad I dragged my three-quarter-sized cello.

After playing Gabriel Fauré’s Elegy and the Gigue of Bach’s Solo Cello Suite No. 3, Zara took my father’s arm, “George,” she whispered, “I really think Janet should consider a different career. She is well behind my students at Juilliard…isn’t she talented at something else?”

Years later when I was a student of Janos Starker at Indiana University, I had the opportunity to study with her for a summer while I was at the Aspen Festival. She joked about our first encounter. Zara knew that Starker was a master of technical ease. “The Claw,” she quipped, “They call me the claw. That’s what people say about my bow grip.” During lessons she focused intensely on conveying the emotional content of the music and on projecting a warm sound. She often spoke about stage deportment, “Your personality should shimmer, larger than life. Exalt your audience.”

Starker – Gigue of Bach Suite no 3

Zara studied with the most eminent cellists of the time including Emanuel Feuermann, Gregor Piatigorsky, and Pablo Casals. She performed the Kodály and Rachmaninoff sonatas during a tremendously successful tour of the Soviet Union in 1966— the first American soloist to do so. Then Zara returned to the realities in this country— cellists were considered “bad box-office” by artist managers and to make matters worse, she was a woman. Little managerial help was offered to her. Her fees were so meager that Zara had to rely on friends to put her up at their homes—anything to be heard on the concert circuit. But Zara had chutzpah! George Neikrug tells the following story—“Conductor, William Steinberg, once told me that she came backstage after a rehearsal and plunked her cello down in front of him and just started playing. He was so impressed that he hired her as soloist every year after that!” 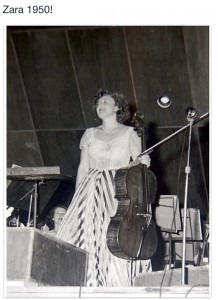 Fortunately for future cellists, Ms. Nelsova was a proponent of twentieth century music. Several eminent composers wrote cello works for her. She premiered the Shostakovich and Hindemith sonatas in the U.K. and in a mere three weeks she learned the Samuel Barber Cello Concerto, which she performed with the London Philharmonic and subsequently recorded with the composer wielding the baton. After the recording sessions, one of the orchestra cellists leapt to his feet and threw his cello down onto the floor. He stomped on it screaming, “I give up! How can I play after that?” Colleagues cheered. The entire orchestra was in on the joke—everyone but Zara. Later she forgave the cellist for the shock— it was still a cello even if it was a cheap one. Such was the awe towards Zara’s playing.

Composer Ernest Bloch wrote his three Solo Suites for her and was at the helm for the recording of Schelomo: Voice in the Wilderness one of my favorites. Later she re-recorded it with Ernest Ansermet. Nelsova’s playing of that work is simply ravishing. “Zara Nelsova is my music,” he said.

Zara had the lifetime use of the famous 1726 Stradivarius cello “Marquis de Corberon.” Just after acquiring the instrument, she turned on the shower to fill the hotel bathroom with steam. Hotel rooms tend to be very dry especially during winter—not good for the aged wood of stringed instruments. She put the cello in the bathroom to hydrate and closed the door—something I have done myself. When Zara returned she found that the cello had come unglued and was lying in pieces on the floor. Fortunately it was put back together again! She played the instrument for 42 years.

Besides giving numerous master classes, Nelsova taught at the Juilliard School and at Rutgers. In order to convey the emotion of the piece Zara insisted on mastery of technique and once said in an interview, “I try to emphasize the importance of technical work with my own students. When I ask them if they have been practicing their scales and they get a shamefaced look, I tell them a story that I got from my pianist Brooks Smith, who was also the pianist of Jascha Heifetz for many years. Smith would rehearse with Jascha Heifetz everyday. Each morning, when he arrived at Heifetz’s house, Heifetz would be finishing up one hour of scale practice. If Heifetz needed to do this, then don’t we all?