Blog
The Song of the Open Road
by Maureen Buja April 5th, 2015 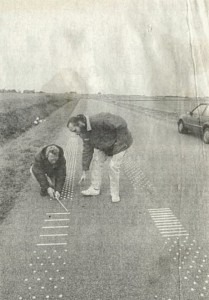 You’re driving along the road and bump bump bump – your tires are sending you a message: either you’re coming up to a toll booth or you’ve driven out of your lane. The cat’s eyes, Botts dots and rumble strips are all designed to keep you awake and in your own lane.

What if we take this the next step forward and combine it with music? The number of musical roads around the world might astonish you.

The first was actually created as a musical instrument, the Asphaltophone, in Gylling, Denmark. This 1995 composition by Jakob Freud-Magnus and Steen Karup-Jensen uses Botts dots to create a simple 4-note fanfare (the sound comes in at 1:30 in the video)

The dots and their position in road make it clear that you have a choice to either play or not play the melody with your tires. Their complex construction wasn’t followed by later composers of music roads. Instead, stripes were cut across the road or were laid down on the road and asphalted over, so that the entire road becomes the vibration – the breath to the instrument of your tires, as it were.

In Korea, the highway department created a singing road in Anyang, outside Seoul. The road was created with safety in mind because of the problem of drivers falling asleep at the wheel. Located on the downward side of an S-curved road, the road will make your tires play “Mary Had a Little Lamb.” Although first intended to keep drivers awake, it has now become a tourist attraction.

It is in Japan, however, that the idea of musical roads has really been taken to heart. In the latest listing, there are over 35 musical roads in Japan and a musical tunnel. The song themes include popular tunes and even 30 seconds of Beethoven’s Ode to Joy. This news report covers three roads in Gunma province in Hokkaido.

Izumi: Miagete goran yoru no hoshi wo (Look up at the stars in the night) (Sayaka Nojiri, narrator, marimba)
One musical road in America, however, is a complete bust. Built by Honda for a car ad for their Civic, the road, in Lancaster, California, is, unfortunately, out of tune. Originally created on 5 September 2008 on Avenue K, the road was paved over on 23 September due to noise complaints. Further complaints about its removal led town officials to recreate the road two miles away. This new road, opened on 15 October 2008 on Avenue G, has the rhythm of the William Tell Overture, but the melody is distorted, it is thought, because of a miscalculation of the pitch. This video of the original installation shows the problem:

A more successful musical road was built by National Geographic on the famous Route 66 around Albuquerque, New Mexico. Irving Berlin’s ‘God Bless America’ sounds as you drive over the highway at the posted speed limit. Like the project in Korea, this road was intended for keeping drivers awake, alert, and driving the correct speed.

We were thinking about what other melodies might be useful for these kinds of projects – can you image what would happen when you hit the cannon parts of the 1812 Overture? How fast would you have to drive to truly make it a Minute Waltz? If you did Brahms’ Lullaby, would it have the opposite effect?