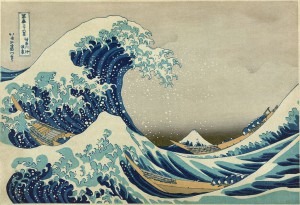 Hokusai: The Great Wave off Kanagawa

Claude Debussy’s entire musical outlook changed after he experienced the subtle and graceful arts of Japan. As a contrast to the filled and busy impressionist paintings that surrounded him, many of the Japanese woodcuts he admired were just as filled with nothing. Space had a weight and a meaning. And so we have his quote: “Music is the silence between notes” where he’s asking us to hear the silence as an integral part of the whole musical work.

In his woodcut, The Great Wave off Kanagawa, Katsushika Hokusai depicts a great wave, perhaps a rogue wave from the open ocean, on the left and three boats with rowers and passengers on the right. In the centre is Mt. Fuji. This print was published sometime between 1830 and 1833 and was the first of Hokusai’s woodcut series Thirty-six Views of Mount Fuji. Westerners read this picture from left to right, focusing on the wave itself and often being unaware even of the existence of the little boats. Japanese viewers read the painting from right to left, seeing first the boats, then the mountain, and finally the wave. This explains Hokusai’s Japanese title, which translates full as “In the Well of a Wave Off Kanagawa.”

Claude Debussy long loved the sea and wrote in 1912 that he had “intended for the noble career of a sailor.” He first wrote about the sea in 1899 in the last movement of Trois Nocturnes, where “Sirènes” refers to those seductresses of the sea, now better known through the logo for Starbucks. 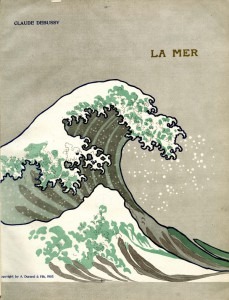 Cover of the first edition of Debussy’s La Mer (Durant, 1905)

While a student in Rome in 1885-1887, Debussy was fond of trolling through the city’s antique shops and one of the prints he purchased and hung on the wall of his studio was Hokusai’s memorable image. In his three-movement work La Mer, written in 1905, Debussy captures many different elements of the sea. Each movement focuses on a different aspect of the sea: the sun on the water (I. From Dawn to Noon on the Sea), the motion of the water (II. Play of the Waves), and the wind on the water (III. Dialogue of the Wind and the Sea).

Debussy: La Mer: I. De l’aube à midi sur la mer (New York Philharmonic Orchestra; Leonard Bernstein, Conductor)
But, what, you may ask, does this have to do with Hokusai? Debussy’s depiction of the sea, despite his three movement titles, is not literal. It is atmospheric, not representational. And that is what ties him in with Hokusai: we are not shown what happens when the great wave meets the little boats, we are given, instead, an atmospheric picture of danger, just before danger strikes. And so in Debussy, we don’t have storms, we have the elements that make up storms. It’s all atmosphere.

Debussy: La Mer: II. Jeux de vagues (New York Philharmonic Orchestra; Leonard Bernstein, Conductor)
Debussy: La Mer: III. Dialogue du vent et de la mer (New York Philharmonic Orchestra; Leonard Bernstein, Conductor)
The importance of Hokusai’s image to this work can best be shown by looking at the first edition cover from 1905 where a detail of the wave itself is used to stand for both the entirety of the sea and of Debussy’s depiction of it and its moods.