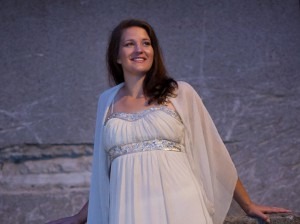 Though not yet 30 years old, Norwegian soprano Lise Davidsen already has an impressive list of awards and prizes to her name – the Léonie Sonning Music Prize, Kirsten Flagstad Award, 2014 three prizes at the 2015 Beveldere Competition and, most recently, the First Prize, the Birgit Nilsson Award and the Audience Prize at the 2015 Operalia Competition.

I’m sure that we will be hearing much of your work in the future, but at the moment you are perhaps not yet so well known to our readers! Could you introduce yourself, and give us some idea of your background?

I grew up in Stokke, a small rural town in south-eastern Norway. There are no professional musicians in my family, and when I was young I was interested in sports, so I don’t know exactly how I got interested in music and singing. At fifteen I entered the local art and culture school and began to take guitar and singing lessons – I wrote my own songs and wanted to be a singer-songwriter or something like that. At high school, I studied music, dance and drama, and with my first teacher Mona Skatteboe I slowly found my way into classical music.

After that I entered the Grieg Academy in Bergen. I was a mezzo-soprano then, and I loved working on baroque music. In January 2009 I became a part of the Norwegian Soloists choir, which was my first experience of professional music-making. I then moved to the Royal Danish Academy of Music in Copenhagen, then met my teacher for five years Susanna Eken, who told me that I was going to be a dramatic soprano! This was a huge change for me – I had to change everything, and even though I see now that starting as a mezzo was a very positive thing, I still remember the change as pretty scary.

This last year has been different. Apart from my debut at the Norwegian National Opera in Oslo, I have focused on studying roles and go to auditions. And then this summer I planned to enter various competitions, which turned out to be better than I expected! 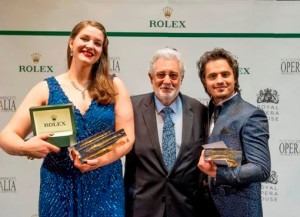 How was your experience of the Operalia Competition? It must be a career highlight for you – could you identify some other recent highlights?

It was great! In my only other competition, there were 160 singers in the first round, whereas at Operalia there were 40, and we were identified by name, and not just a number. The biggest difference is Placido Domingo. It was such an honor to meet him and to sing with him as a conductor. But also it’s his, and his family’s competition – they give everything that week, and when we go home, they keep working. Even if you don’t reach the final, they remember you, because they want to help as much as they can. That’s what makes it a special competition, and why I will remember every part of it. Even the fact that I was nervous almost the entire week!

What are your plans for the near future? In the competition final you sang Wagner – is that the sort of repertoire you are interested in pursuing?. Do you have particular roles you would like to explore, or do you have a wide range of musical interests?

Future plans include lots of Wagner – Ortlinde at the Bayerische Staatsoper in Munich, and in the autumn a Norn and Freia in Frankfurt. In between I will keep working on future roles and give concerts with opera repertoire and song. I would also like to sing Elisabeth in Tannhäuser in the future – but not yet! I anticipate that the German repertoire will be central to my work, and I feel very connected to German music, language and culture. But I also love the Italian, Russian and Czech repertoire – there are so many wonderful roles that I don’t want to just do one thing. So I suppose I’ll try to do as many different roles as possible – if I get the chance!

Which other musicians, especially singers, do you admire?

I don’t have one favorite singer in particular. It depends on what I want to listen to, and I find a lot of inspiration from my colleagues. But I love to listen to the great singers of history too. There is something special about their recordings, singing, phrasing and so on – I always learn something or find inspiration. But sometimes it can go the other way. I can listen to something and it makes me feel like a very bad singer – I think I will never be able to do something like that! So then I just have to leave it for a while.

Do you have any interests outside of music?

I exercise out three times a week, and I love to watch a good handball match! But my main interest is really my friends and family. I tend to focus on my work so much that I forget about spending time or make time for my friends and family, and they give me a great amount of support and space to think about something else, and I really love that. So, though it’s perhaps not an interest, it’s a major part of my life, and I need to remind myself sometimes that I also have to take care of that. Don’t take it for granted!