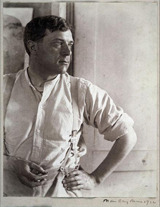 Violins, guitars, mandolins, music sheets and references to classical composers are very much part of Braque’s oeuvre, particularly during his analytic and synthetic cubist period, which essentially started in the early part of the 20th century and lasted well into the 1930’s. For many years, his work was overshadowed by his close friend Picasso, to the point that many of their early works could not be distinguished as works by one or the other. Their works were frequently not signed, and so correct attribution was even more difficult. Although Braque was often considered as working in the shadow of Picasso, recent exhibitions of Braque’s works in Paris, France and at the Phillips Collection in Washington, D.C. focused on the evolution and importance of his work, showing that he very much left his own distinctive mark on the history of painting in the 20th century. 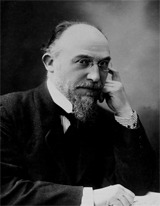 Georges Braque, like many of his friends, served and was wounded in World War I. He was part of the group of writers, painters and musicians of the French Avant-Garde — Apollinaire and the Surrealists, Stravinsky, Diaghilev and his Ballets Russes — and he became close friends with the composer Erik Satie. Braque loved music as much as his paint brushes. He was a very competent, classically trained musician, playing the violin, the flute and accordion – instruments which make appearances in his cubist paintings (see accompanying photos). For Braque, inanimate musical instruments came alive through touch — just as paintings come alive through eye of the viewer. In many of his paintings, the flat surface of the canvas is deconstructed into what Braque would call his “little cubes”, showing shifting planes and angles of objects, with a color palette usually reduced to blues, greys and tans. Often, words, references to composers (such as Johann Sebastian Bach and Mozart) and sheet music are included. 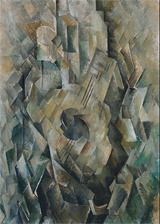 Bach was Braque’s favorite composer — the homage paid to Bach in several of his paintings (such as the ‘Still-Life Bach’ of 1912) suggests that Braque perceived a similarity between Bach’s polyphonic compositions and the shifting planes and multiple perspectives of his own paintings, which can be seen as musical compositions on painted surfaces. Braque often used wood grain paper (particularly in reference to violins) and sand to give texture to his paintings, introducing ‘ready-mades’ to give yet another, different perspective of the depicted objects. In many of his paintings, the bare canvas is visible, reasserting by its white color that it exists in and of itself, and that the work’s surface does not have to be entirely covered by paint. The now-visible canvas refers to the painted surface as a flat surface — no longer following the dictum of Renaissance painting, i.e., that paintings are three-dimensional compositions with a vanishing point — a window looking into the ‘soul’ of the depicted person within a landscape or architectural setting. 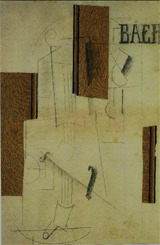 Braque’s painted compositions fuse the deconstructed objects, foreground and background, leaving the reconstruction and interpretation open for the viewer and suggesting a ‘multiple vision of the world’. His close friendship with Erik Satie became a direct inspiration for his work. In his painting ‘Guitar and Glass’, Braque used parts of Satie’s score for ’Socrate’ (Socrates – a symphonic drama by Satie). Braque was also asked by the editor and gallery owner Daniel-Henry Kahnweiler to illustrate Satie’s lyric comedy ‘Le Piège de Méduse’ (The Trap of Medusa). 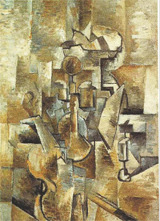 Erik Satie’s compositions, in particular his ‘Gymnopédies’ and ‘Gnossiennes’ can be compared to Braque’s ‘constructions and deconstructions’, i.e., pictorial representations of the musical, where each depicted instrument becomes part of the orchestration of the painting — visually, tactically and emotionally — with the nuance of color becoming part of an imaginary symphony. Satie considered his compositions ‘musique d’ameublement’ (‘furniture music/ background music’) — renouncing virtuosity and refinement, but creating a system of ‘building blocks’ — constructions and deconstructions. Often, his flowery, musical, often almost absurd annotations, such as “Almost Invisible, Very Christian, Bury the Tone in the Pit of Your Stomach” rather than the usual Italian designations such as ‘moderato, largo, allegro’, seem in stark contrast to the musical simplicity and clarity of his work. 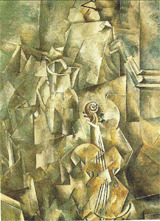 His sense of humor (not taking his own works seriously) appears in many of the titles he gave to his works, such as “Unappetizing Chorale, Three pieces in the Form of a Pear”, and definitively link him to the Surrealist and Dada movements. His compositions ‘Gnossiennes’ and ‘Gymnopédies’ are dance-like pieces without time signatures or bar time indications — “free time” — giving the pianist freedom of interpretation, with indications such as “Postulez en vous-même” (Seek or wonder about yourself) or “Du bout de la pensée”(From the tip or depth of thought). The Greek term “gnosis” means true knowledge and is supposed to lead man to true emancipation, but Satie’s plaintive, undulating melodies, just like Braque’s paintings, leave the interpretation open to the viewer/listener/performer.

Satie’s composition for the ballet ‘Parade’ (written for the ‘Ballets Russes’) can be considered a ‘cubist’ musical invention — the piece evolves through contrasting slow and fast, hard and soft, somber and vivacious – here too, the listener has to invent his own interpretation, his own story. Whistles, drums, flutes and fanfares appear, seemingly at the whim of each of the musicians.

Many of Satie’s and Braque’s works evoke a perpetual harmony, tonality and rhythm, creating a ‘tapisserie’, a tapestry of sound and color, which involve the listener/viewer in a constantly challenging, new adventure.