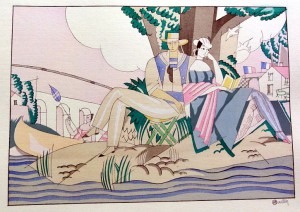 Like many composers past and present, Erik Satie was in constant financial troubles. To escape his creditors he frequently changed his lodgings, ending up in a tiny room at 6 rue Cortot in the spring of 1890. Like a monk locked into his cell, Satie was looking to create a new musical style. His association with the flamboyant Joséphin Péladan led to Satie’s appointment as official composer of the “Ordre de la Rose-Croix Catholique du Temple et du Graal.” His connection to the Rosicrucian’s, a philosophical secret society originating in the Middle Ages, shaped Satie’s interest in mystical religion and Gothic art. Part of his musical experimentations investigated sound as static background. Le fils des étoiles is not at all concerned with its theatrical surroundings, but pursues a self-sufficient and independent course of musical expression.

Erik Satie: Le fils des etoiles: Gnossienne No. 7
Determined to improve his compositional technique, Satie enrolled in the “Schola Cantorum de Paris.” This private music school was founded in 1894 by Charles Bordes, Alexandre Guilmant and Vincent d’Indy as a rival to the Parisian Conservatoire. Opposing the heavy emphasis on opera, the “Schola Cantorum” fostered the study of Renaissance polyphony, Gregorian chant and late Baroque models. Satie managed to gain diplomas in a couple of subjects, yet his compositions nevertheless retained their sense of parody and irreverence. Above all, Satie was mainly interested to develop avant-garde versions of old forms, using static chord-progressions for his chorales, and short-winded and elliptical subjects for his fugues. 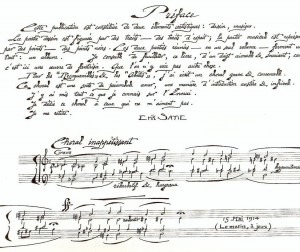 Almost overnight, Eric Satie became famous. Many critics saw him as the harmonic forerunner of Impressionism who had influenced Debussy and Ravel. Satie became the focus for a number of young composers, and the publisher Demets agreed to issue his Véritables préludes flasques in 1912. Over the next 3 years, humorous piano sets peppered with whimsical instructions rolled off the production line. Eccentric titles like Three real flabby preludes for a dog or Dried up embryos are to be played “Light as an egg,” or “Like a nightingale with toothache.” This extremely productive and stimulating period culminated in the Sports et divertissements of 1914. These pieces are assembled like a jigsaw puzzle from an assortment of short motifs, and combined with drawings by Charles Martin. With its emphasis on abrupt contrast and an internal logic only known to the composer, Satie foreshadowed a number of surrealist experimentations in arts and in music.

Erik Satie: Sports et divertissements
During the later stages of his career, Satie collaborated on five theatre works with Cocteau, three with Picasso and three with the choreographer Massine. After the success of Parade in 1917, Satie worked with Diaghilev’s “Ballets Russes” on six ballet projects, four of these involving the painter Derain. Satie’s real masterpiece of his later years is Socrate, a work the composer called “return to classical simplicity with a modern sensibility.” The text is extracted from Plato’s Dialogues, and this “symphonic drama” follows a linear logic in the succession of motifs. Satie wanted to make Socrate “white and pure like antiquity,” and he likened it to “furniture music.”

Erik Satie: Socrate
Igor Stravinsky heard Socrate in 1919 and was greatly impressed! Satie’s influence on Debussy, Ravel and the young composers of “Les Six” is undeniable. Following his death, Satie was predictably vilified by an artistic world that felt alienated by his explosive rages and seemingly irrational behavior. It was John Cage in the 1960’s who elevated Satie once more to cult status. Tellingly Cage wrote, “Satie is indispensable to the development of contemporary music.”