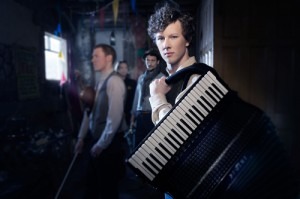 With already a Decca album under his belt at the age of 22, Martynas Levickis is a concert accordionist ready to take on the world and its assumptions of the accordion. Quickly skyping in between concerts at the world-famous Schleswig-Holstein Festival, I found out how it all started, and where it’s all heading.

‘The Academy was the only institute in England that had an accordion class,’ he explains. The common problem of little contact time found at many conservatoires was not a problem for him. ‘I studied with Owen Murray, the only teacher in the Academy. The department was small [ranging from three to seven at any one time], but it was good, because everyone was always busy.’

Like many musicians, Martynas didn’t actively choose his instrument. ‘I actually wanted to play the piano. Well, saying that, I was only 3 years old at the time!

‘My family tried to get a piano, but my uncle gave me an accordion as an alternative, and I just started messing around on it.’

Martynas reminisces briefly about his earlier days, interestingly indicating that his early talent was in fact a drawback when moving from the freedom of home into the structured environment of a music school.

‘I went to a music school when I was about 8, already knowing the instrument a bit. At the time, I thought I knew it perfectly! It was difficult to start listening to someone telling me what to do in a structured way. Because of also having to learn theory and aural in these first two years, it was a difficult time for me.’

Martynas’ album has an incredibly varied mix of styles, ranging from Bach to Lady Gaga, but I was surprised to find no Piazzolla among the tracks. However, he quickly puts my fears to rest. ‘I’m actually happy there’s none of his music on the album. I love his music, and think it would make sense to create a separate album, devoted to Piazzolla. There’s still so much undiscovered Piazzolla – everyone knows Liebertango and Histoire du Tango but there’s so much still to find.’ 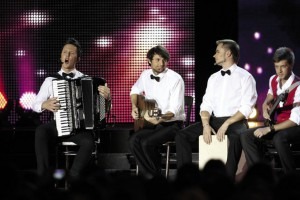 It’s clear that Martynas’ work is far from done – he speaks of his ‘mission’ to bring the instrument to the concert hall, ‘To convince people that it’s equal to any other instrument. People come up to me after playing Bach and sometimes they say it was better than the original instrumentation. That’s what I want to hear!

‘The accordion was invented to accompany songs and dances on the street. This folk image destroyed any possibility of the instrument being classical. But you realise in these folk bands you see strings, clarinet, and percussion, all of which belong to the classical world. Basically, it all depends how you play it. About 60 or 70 years ago, the instrument was reinvented and developed to such a level that you can play classical piano repertoire, for example, without actually transcribing it. 70 years isn’t a long time, when you think that the piano and violin have had hundreds of years to develop their repertoire. The accordion is still gaining an identity in the hands of many performers. There’s no history there, so we have to create it!’

Given the freedom with which Martynas can move between genres, I ask him if there is any one style in particular he enjoys inhabiting the most. ‘It’s almost impossible to define what my favourite style is. My career means that today I’m playing Bach in Schleswig, but tomorrow I’m off to the Edinburgh Jazz Festival. I play anything from Lady Gaga to my own folk arrangements. Perhaps the most rewarding genre to play is classical. It requires a lot of precision, a lot of effort. If you’re successful you feel really great after a concert.’

Given his highly intense travelling schedule, it’s no surprise that the little spare time he has he devotes to taking a break. ‘When have time I just want to rest! When at home I like to cook a dinner with friends, and sleep! I went to Warsaw from a movie that we were filming in Lithuania, mostly at night. After almost no sleep in Warsaw I arrived in Schleswig and finally had a day to rest! It’s important to try and rest when you can.’

Johann Sebastian Bach Fantasia and Fugue in A minor BWV 561