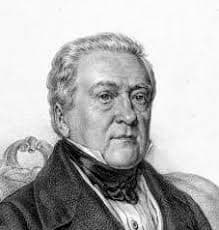 Raphael Georg Kiesewetter (1773–1850) studied philosophy at Olmütz and law in Vienna before he was employed in the chancellery of the imperial army. Subsequently, he became a valued official at the war office in Vienna. Kiesewetter was an accomplished musician who had studied with Albrechtsberger, and his interest in early music led him to collect a large number of scores. A pioneer in the field of musicology, he studied the music of Greece, Egypt, and Arabia. However, Kiesewetter also arranged numerous concerts featuring contemporary music, and Schubert’s compositions increasingly occupied a central place. And Schubert personally attended a great number of concerts at Kiesewetter’s home. Kiesewetter was an accomplished bass, and he took part in many public and private concerts. On 9 January 1823, he sang in a performance of Schubert’s quartet “Geist der Liebe.” 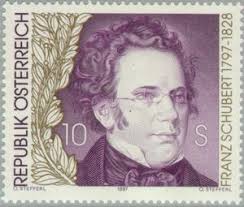 During Schubert’s first visit to the city of Steyr in 1819 he became acquainted with the family of the wealthy iron merchant Josef von Koller. Schubert writes to his brother Ferdinand, “The daughter of Herr von Koller, at whose house I dine with Johann Michael Vogl each day, is very pretty, plays the piano well, and is going to sing several of my songs.” Josefine Koller was indeed “very talented” and the trio made music at the Koller’s house most evenings. On one occasion, they amused themselves by performing the “Erlkönig” as a trio, with Schubert as the father, Vogl as the Erlkönig and Josefine as the child, while August Stadler played the piano accompaniment. To mark Vogl’s birthday, Stadler wrote a cantata which Schubert set to music, and which was sung by Josefine. The talented Josefine featured in a number of performances of Schubert Lieder, and the composer also wrote a piano sonata for her in summer of 1819. 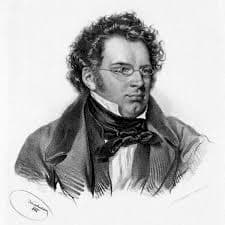 Portrait of Schubert by Josef Kriehuber

Josef Kriehuber (1800-1876) developed an early interest in lithography, and over his brilliant career he produced some 3000 works augmented by 200 watercolors and 20 oil paintings. Everybody in Vienna wanted to sit for Kriehuber! And that included members of the imperial family and the nobility, alongside musicians, painters, writers, actors and scholars. In fact, Kriehuber immortalized Beethoven, Diabelli, Haslinger, Sechter and Schubert. Kriehuber was also part of the Schubert circle, and we know that he attended several balls at Franz von Schober’s during 1827. Kriehuber married Marie Forstern on 1 February 1827, and both were invited by Schober on 4 March to hear Schubert’s latest compositions. Kriehuber’s famous lithograph portrait of Schubert—which exists in two versions—was actually not drawn until after the composer’s death, and opinion are divided whether it is an excellent likeness of Schubert or not. 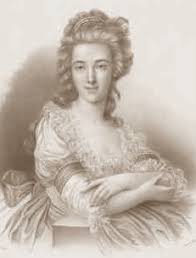 Karoline, sometimes spelled “Caroline” Pichler (1769-1843) led the most prominent literary salon in Vienna from 1802 to 1824. As a young girl she had met Haydn, and she even was a pupil of Mozart. Pichler spoke Latin, French, and Italian and published her first poem at the age of 12. Eventually she made her mark in historical romances, which gained great popularity. In all she penned roughly 60 volumes, and that included a four-volume autobiography. She was one of the leading female intellectuals of Biedermeier Austrian society, and Beethoven, Friedrich von Schlegel, Luise Brachmann, Franz Grillparzer and Franz Schubert frequented her salon. Pichler had the following to say about Schubert; “he brought into existence what was beautiful and moving in his compositions almost unconsciously.” She also explained that Haydn and Mozart must also have possessed the same mysterious powers. Schubert himself is known to have visited Pichler’s salon repeatedly, and at some point was even heard singing some of his songs. As the anonymous eyewitness reported, “Schubert sang with great feeling but with very little voice.” It’s too bad that we really don’t know if Schubert sang one of his many Pichler settings.