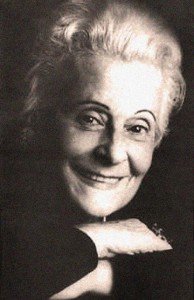 French pianist Jeanne-Marie Darré (1905-1999) took the works of Chopin and Liszt as her hallmark, being known for her lyrical and elegant style. After first taking lessons from her mother, she studied at the Paris Conservatoire, first as a preparatory student of Marguerite Long and then with Isidore Philipp, and also working with Fauré, Saint-Saëns, and Ravel. Because of her small hands, Philipp encouraged her to work on technique to develop very clear articulation.

Her stage debut occurred at age 14 and she made her first recordings 2 years later. Her Paris debut came at age 20 with a wide-ranging program of Galuppi, Couperin, Beethoven, Chopin, Liszt, Henselt, Moszkowski, Chabrier, her teacher Philipp, and Schubert-Tausig. A phenomenal concert with the Concerts Lamoureux Orchestra occurred in 1926, when, at age 21, she played all 5 of Saint-Saëns’ piano concertos in one concert. This highlighted a concert style she used frequently: performing all of a composer’s work in a single genre. She would do single recitals of all the Chopin Preludes and Études, for example.

Her performing career took place largely in Europe, and she only began to tour America in 1962, making her Carnegie Hall debut with Saint-Saëns’ Second Piano Concerto. We can hear that clarity of playing she was known for at the beginning of this recording.

D’Indy: Symphonie sur un chant montagnard francais, Op. 25, “Symphonie cevenole”: II. – (Jeanne-Marie Darré, piano; Lamoureux Concerts Orchestra; Albert Wolff, cond.)
IN 1974, the International Piano Library had a massive fundraiser at the Royal Albert Hall and Jeanne-Marie Darré was one of the participants. She can be seen in this video as the only white-haired performer, with particular focus on her at 02:55.

She was professor of piano at the Paris Conservatoire from 1959, and in 1966, she was made an Officier of the Legion d’Honneur, a year later, a Chevalier des Arts et des Lettres, in recognition of her work.