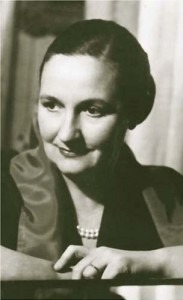 Greek pianist Gina Bachauer (1913-1976) started her studies at the Athens Conservatory before attending the Ecole Normale de Musique to study with Alfred Cortot. In Paris, she was also able to study with Rachmaninov. Her professional debut was made at age 25 with the Athens National Symphony Orchestra. With the advent of WW II, she played hundreds of concerts for the Allied forces in the Middle East. After the war, she restarted her career in London with a concert at the Royal Albert Hall, conducted by Alec Sherman, who she later married.

Bachauer has often been called the greatest female pianist of the 20th century. Her consummate style was considered the best representation of the romantic piano tradition. She was praised for her enormous technique, her penetrating tone, and the intensity of her passage work. Her performance of Rachmanov’s Piano Concerto No. 2 brings out all of these qualities in her playing.

In a work such as Brahms’ Paganini Variations, it seems perfect for the breadth and strength of her technique. Percussive, lyrical, demonstrative, and singing qualities of piano playing all required and she meets them with style and grace.

Brahms: 28 Variations on a Theme by Paganini, Op. 35: Book 2 (Gina Bachauer, piano)
She had a special affinity with Maurice Abravanel and the Utah Symphony, frequently performing with them and making their first international tour possible in 1966. Her personal papers, recordings, photographs, and over 200 scores were left to the Brigham Young University library, which created the Gina Bachauer Archive. Utah is also the home of the Gina Bachauer International Piano Competition. Begun in 1976 at Brigham Young University, it moved in 1980 to Salt Lake City.

One of her wonderful fun performances was done in honour of the International Piano Library with a concert at the Royal Festival Hall in December 1974. She, Alicia de Larrocha, and the wonderfully tall Garrick Ohlsson perform a work for 6 hands by W.F.E. Bach.