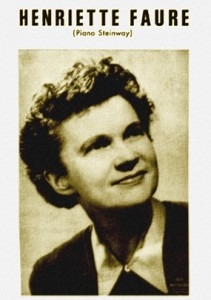 French pianist Henriette Faure (1907-1985) made the music of Maurice Ravel sing on the performing stage. One of the first to play his music in public, she made recordings of his works from the 1930s to 1950, but died before she was able to complete her projected recordings of the complete piano music of Ravel.

The first piano recital consisting solely of Ravel’s music was given by Faure in 1923 at the Théâtre des Champs-Elysées in Paris. She had spent much of 1922 working with Ravel and her recordings are considered closest in spirit to what the composer had intended. 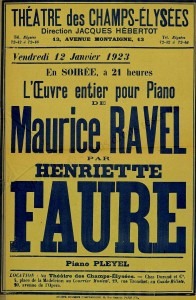 Poster from the 1923 Concert

In her book Mon maître Maurice Ravel (1978), she wrote about playing Jeux d’eau to him and his reaction:

After I had played the piece, Ravel said only one thing: ‘Your fountains are sad ones. Anyone would think you hadn’t read the epigraph by Henri de Régnier’ (‘The river god laughing at the water as it tickles him’). So I began again, this time at a livelier speed and, in the Ravelian manner, hurrying the hemidemisemiquavers leading up to some of the themes, giving a little air to the curves of the melodic lines and the gaps between them, lifting my hand abruptly to give a cleaner ending to tied notes and above all thinking happy thoughts, so as to turn what I had previously thought was a meditation into a sparkling divertimento. Ravel said, ‘That’s more like it, but you could even so be a little dreamier at the end … as long as …’ and I cheekily finished his sentence with ‘you don’t slow down’. He might have been cross at being mimicked like that but in fact he laughed quite openly.

You can hear the light and playful mood of the waters in her recording. The second piece on the recording, Prélude (05:15), was written by Ravel in 1913 for the sight-reading part of the women’s competition at the Paris Conservatoire.

In this performance of his Miroirs, she captures perfectly the varying images and emotions of the work, from the sad birds to the humour of his Spanish setting.

Faure brings us a living Ravel – someone with whom this music was discussed and perfected and this comes through in her performance.