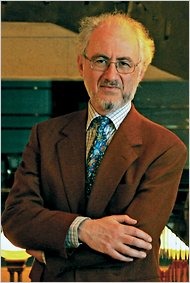 Writer, broadcaster and blogger Norman Lebrecht draws an impressive 1.5 million monthly readers to his blog Slipped Disc, well-known throughout the classical music world for being the first to report on the most recent goings on.

The blog’s content is continually refreshed with the latest stories, gossip, scandal and everything in between. Music director of the Opera resigned? Soloist dropped out of a performance? Chances are you’ll read it on Slipped Disc before anywhere else, with several new articles appearing daily.

Getting hold of Norman is as difficult as it sounds, and like many of the blog’s articles, which pique one’s interest and offer further reading elsewhere (the average word count for the most recent five stories I can find is 76), Norman’s answers are concise and matter-of-fact.

Did you start out as a music critic before the blog?

I never was a music critic. I’m a writer who chose music as his principal subject, but I was never interested in going out and reviewing concerts. Records are another matter. Judgements are less subjective since they can be constantly tested on replay.

How do you decide what to write about for your blog?

Whatever sets my pulse running. There is a huge choice every morning.

How does Slipped Disc stay so on the pulse of the news in the performing arts sector?

We have 1.5 million monthly readers, many times more than any other classical medium. Much of the information is supplied by our readers.

Where does the name Slipped Disc come from?

I wrote a book, Maestros, Masterpieces and Madness, about the decline of the classical record industry. The site started out as a journal of that decline.

Is there really still a need for music criticism and what is the essential difference to blogging activity?

There will always be a need for intelligent comment on music. The problem is that old media perceive the classical readership as marginal to their attempts to stay alive. The result is that classical music, like many other pursuits, has grown its own niche media.

What was the most memorable concert (either positive or negative) that you attended? Do you have a favourite performer?

Memorable? Heifetz in Jerusalem. I have dozens of favourite performers.

Can you tell us about your most embarrassing moment?

Have you received any irate mail or comments?

Of course. Life would not be the same without them. Some of the irate commenters later became friends.

With the growing number of papers that do not have critics, what do you see as the future of print criticism?

Bleak. Those papers that still carry classical reviews know that they are the least-read inches in the paper.

Do you see blogs having the same power as print criticism or a different effect?

What would you suggest for up-and-coming critics for honing their talents?