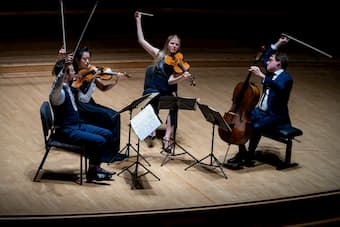 One of the most engaging descriptions of the string quartet comes from Stendahl, writing in his Lettres … sur … J. Haydn (Paris, 1814), where he described how a woman of intelligence laid out the relationship between the four instruments for him: she ‘found the quartet similar to the conversation of four friends, the first violin, a middle-aged man and a good speaker, leading the discourse, supported by his friend, the second violin, who would seek to allow the first to shine: the viola would be a knowledgeable man of sound opinions, occasionally adding his own laconic but truthful comments, while the cello was a woman who had nothing very important to say, and yet always sought to take part in the conversation, adding an element of gracefulness and sometimes allowing the others time to draw breath.’

In their 7 December concert, the Doric String Quartet take two string quartets, one by Mozart and another by Britten, and create the intelligence discourse Stendhal described 200 years ago.

The first quartet, Mozart’s Prussian Quartet No. 3 (String Quartet No. 23 in F major, K. 590), was written in the style of Haydn as a gift to the King of Prussia, Friedrich Wilhelm II. In April 1789, Mozart was in Potsdam where he was received at the Prussian court. He was supposed to write six quartets for the King, but only three were completed. He wrote the first in June 1789 and the second two in May and June 1790. They didn’t bring him the reward he expected from the King and, at a time of great financial troubles, he eventually sold them to his publisher, Artaria, for whatever he could get for them. They were to be issued only after his death in 1791.

The second quartet on the program, Benjamin Britten’s String Quartet No. 3, Op. 94, was written for the music critic Hans Keller, long an admirer of Britten’s work. Dedicated to Keller, the work was written in the last months of Britten’s life. He never heard a public performance of the work, although the Amadeus Quartet gave a private performance for Britten in September 1976. The composer’s health had deteriorated so much by that time that he could only listen to it in short sessions. Britten died 4 December 1976.

The work is unusual in that it consists of 5 movements. The two outer movements frame the shorter interior movements– the shortest of which is just over 2 minutes in length. The work seems almost like a suite, with its contrasting movements and an early draft of the work is entitled “Divertimento”- in the end though, Britten created a much more interesting work than his earlier, much lighter Divertimenti. In the final movement, Recitative and Passacaglia (La Serenissima), Britten has included material from his opera, A Death in Venice (‘La Serenissima’ refers to Venice). The barcarolle theme of the gondolas is part of the Recitative section and the Passacaglia section’s theme was ‘suggested by the pealing bells of the church of Santa Maria della Salute.’ The work ends as Britten intended when he stated ‘I want the work to end with a question.’


The Doric String Quartet, with members Alex Redington and Ying Xue on violin, Hélène Clément on viola, and John Myerscough on cello, was formed in 1998 and in 2015 was appointed Teaching Quartet in Association at the Royal Academy of Music in London. They were winner of the 2008 Osaka International Chamber Music Competition in Japan and were awarded 2nd prize at the Premio Paolo Borciani International String Quartet Competition in Italy. Their tours encompass not only England and Europe but also the United States, making their Carnegie Hall debut in 2017.