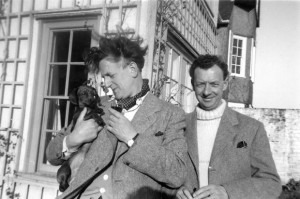 In August 1959, Jubilee Hall in Aldeburgh was undergoing a complete refurbishment, and to celebrate its reopening a year later, a new opera was definitely required. Since Benjamin Britten already was the artistic director of the Festival at that time, he decided to take on the task and compose a full-length production. However, this also meant that from conception to opening night he had less than a year, putting himself on an extremely tight schedule. As such, Benjamin Britten and his partner Peter Pears had to quickly settle on a libretto. “There was no time to get a libretto written,” explained Britten, “so we took what was already to hand.” Britten, who excelled in the ethereal evocation of night and dreams and nightmares, turned to Shakespeare’s fantasy-comedy A Midsummer Night’s Dream (MSND). Britten wrote, “I have always loved MSND, and was excited by the various levels of action between the different groups of characters.” Shakespeare’s play offered the composer two distinctly different worlds, one human, and one inhabited by fairies. The real and unreal worlds all mixed together until reality becomes fantasy. And Shakespeare’s play certainly offered that ambiguous eroticism that pervades much of Britten’s musical language. The play contains all the dramatic elements—moments of genuine human emotion, a bewitching air of wonder, and lots of romance—that has made MSND an audience favorite for centuries. And the same qualities are equally abundant in Britten’s operatic adaptation.

Britten and Pears made several radical changes to the Shakespearean play. For one, the opening of the opera is now set in the forest near Athens, and it gradually introduces the supernatural beings before the human lovers, the rustics, and the Duke’s court. They also reduced Shakespeare’s five acts to three by cutting roughly half the text. However, they only needed to insert six words of their own! Despite these enormous cuts to the text, Britten famously stated, “the original Shakespeare will survive.” By operatic standards, that still leaves an enormous number of characters: Two pairs of confused lovers, the King and Queen of the fairies who are fighting over a foundling child, the Duke and his intended wife, and a band of bumbling commoners. Yet, Britten’s music brilliantly moves between these distinctly different worlds, illuminating their relationships with, and to each other. The primary reason why this opera is so successful on a musical level is found in Britten’s ability to capture the disparate narratives in contrasting sound worlds.

Throughout the opera, the supernatural elements are musically encoded by the use of ostinato devices, and the fairies live in a sound world of bright instrumental colors. “They are portrayed by children’s voices—showcasing Britten’s ever-present concern with the theme of purity—often raw and strident, with accompaniment of harps, harpsichord, celesta, vibraphone, glockenspiel, and other percussion.” On the other hand, Oberon, the king of the fairies is musically portrayed as a jealous and sinister tyrant. His music references the brilliance and drama of Baroque opera, but even more ingeniously, his role is written for a countertenor! As such, he perfectly blends with Tytania’s brilliant coloratura soprano. And then there is Puck, the head fairy. Britten regarded him as “absolutely amoral and yet innocent,” and decided to make his a speaking part, rhythmically notated.

Britten reserves his most romantic musical style for the amorous affairs of the human lovers. Warm strings and gentle winds characterize the pairs of lovers, and their jealous anguish is hauntingly expressed in increasingly chromatic musical lines. However, when they are under Puck’s misdirected spell, “Britten subtly alters and intensifies the contours of their vocal lines, culminating in the women’s quarrel.” Eventually, and after a haunting horn call, the lovers’ reconciliation is scored in a simple and ecstatic, yet highly effective, vocal quartet. Musically, the rustics inhabit the world of low woodwind and brass instruments, and in the mock play “Pyramus and Thisbe,” Britten parodies the operatic styles of Rossini, Donizetti, and early Verdi. And when the character of Snout emulates 20th century “Sprechgesang,” Hippolyta curtly comments, “This is the silliest stuff that ever I heard.” On the simplest level, Britten’s setting of A Midsummer Night’s Dream provides an evening of sheer enchantment and entertainment as a traditional fairytale with plenty of comedy. However, it is also a psychological case study, in which purity, innocence, madness and cruelty are played against each other with riveting effect. Furthermore, it is filled with musical references and satire, ranging from Baroque opera, to a parody of nineteenth-century Italian opera and even Schoenbergian expressionist power.” MSND quickly became part of the international repertory. It still ranks, as “one of the most successful operatic adaptations of a Shakespeare play, and it is possibly the most enchanting of all Britten’s operas.” Above all, it should be considered a work of the highest imaginative order.

A Midsummer Night’s Dream will be performed at the Beijing Music Festival on 15 and 16 October 2016.
Official Website