Media
What do conductors do?
November 12th, 2014
Tags: conductors 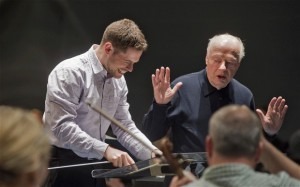 Do orchestras really need someone flapping their arms on a podium? Yes, actually. Ivan Hewett explains why

Whisper it quietly – do orchestras actually need conductors? Aren’t they just overpaid martinets? Catch some of the “poor bloody infantry” in the pub after a concert – ie the orchestral players – and soon enough the horror stories emerge: the petty tyrant who delights in bullying players, the aged maestro with a tremulous beat like a flagpole in a stiff breeze, the greenhorns who come garlanded with competition prizes but still have to be nursemaided through the music by the players.

It’s worth remembering that the conductor as presently conceived is a recent invention. Music that involves coordinating a group of players or singers has always needed a timekeeper of some sort. But no one was silly enough to think this role might be divinely inspired. In Baroque times the orchestra was led by the harpsichordist, and his repertoire of gesture was necessarily limited.

In the 19th century, as the orchestra expanded and forms like the symphony became more varied, the conductor became essential. But in Beethoven’s time his role was still a humble role. The rot set in with Wagner, and successors such as Mahler. Their grand manner engendered the idea that a conductor is the musical equivalent of the literary critic – an inspired being, whose sacred role is to divine the “message” of the creator and transmit it to a grateful audience.

So where does the truth lie? Is a conductor no more than a combination of timekeeper and showman, emoting like mad for the crowds? Or does he (or she) truly reveal something extra in the music, some extra ounce of expressive intensity or layer of meaning that the players might not discover for themselves?

My feeling is that conducting always has an element of both. This isn’t the cynicism of a critic who’s been to too many concerts. It’s simply a fact that showmanship and emoting are part of a conductor’s job. It’s hard for an audience to follow the twists and turns of a big Mahler symphony, or a Strauss tone-poem, and they look to a conductor to tell them what to feel (that’s why some people prefer to sit behind an orchestra, even though the sound there is much poorer).

It’s also true that, before all else, a conductor is a timekeeper. But let no one think this function is either straightforward in principle or easy in practice. A musical pulse is a mysterious thing, with only a superficial similarity to the mechanical exactitude of a drum machine. It’s a living, breathing thing, varying minutely from beat to beat. It might imperceptibly gather speed and energy as the melodic line moves to its climax, or ease back as the music’s energy ebbs away.

Now add to that already complex phenomenon the extra factor of a large number of players, some with instruments with a sharp attack like a high clarinet, some with a soft, cushioned sound, such as the string section. Then add in the composer’s numerous written indications for speeding up and slowing down, and historical conventions about tempo (such as the “lilt” of a Viennese waltz), and suddenly the business of simply “keeping time” in orchestral music seems almost impossibly complex.

Decades ago, when I was a student at one of the London conservatoires, I discovered just how difficult conducting really is. With the cockiness of youth I reckoned it was something I could add to my portfolio of skills without too much trouble. I signed up for a course, and soon found myself in front of a student orchestra, with a Brahms symphony on the music stand. I gave what I thought was a clear upbeat into the piece, and almost immediately things started to fall apart. The winds raced ahead of the violins, the basses lumbered in their wake. The horns missed an entry, probably because they were laughing. Meanwhile I flailed on. Brahms’s carefully contrived texture disintegrated like a ghastly slow-motion car crash.

Even when they don’t actually collapse, performances led by beginner conductors always have a strange blank quality. It’s as if the violins are deaf to the cellos, and horns to the woodwind; there’s no guiding spirit which makes everything cohere.

Last week, at a masterclass given by eminent conductor Bernard Haitink at the Easter Festival in Lucerne, I witnessed several young conductors who, at this level of basic intelligibility, were all pretty competent. But the experience of the maestro, as he talked about the piece they were conducting (Mahler’s Fourth Symphony) showed that they still had a long way to go.

A common problem was a failure to pay attention to the composer’s markings in the score. “Playing what’s written” sounds dull, but actually it’s really hard, because what’s written needs imagination to be brought to life. Haitink pointed out a telling indication in Mahler’s symphony: “geheimnisvoll” — literally, “secret-full”. How on earth do you make something sound secretive? The young conductor on the podium was flummoxed, so Haitink seized the baton. And instantly a dusky, mysterious quality appeared, bearing down on the music like encroaching dusk.

Another common failing is luxuriating in the colourful or exciting moment at the expense of the whole. I lost count of the number of times Haitink had to remind the young conductor that it was a symphony they were supposed to be performing, not a series of brightly coloured miniatures.

“You really must guard against doing a ritenuto (holding back) at the end of every phrase,” he said to one conductor, who had revelled a bit too much in the regretful dying-away quality in the music. “There is so much emotion in this movement, if you add more now how can you be more intense later?”

One problem some conductors encountered is what a conducting friend of mine calls the “Grecian Urn” syndrome. This is where the left hand mimics the right hand exactly, tracing the outline of an antique urn. It’s more picturesque than the “dead hand” syndrome, where the left hand hangs limply, but just as useless.

Used intelligently, the left hand has many uses. It can tell the players (and the audience) that they should hear a long line persisting through an apparently choppy musical surface. And it can define and intensify an orchestral colour.

That may seem implausible, but I’ve seen it countless times, including at this masterclass. After a student led a politely understated performance of the second movement, Haitink reminded her that “this is really nasty music, not at all charming. It needs more sarcasm.” He then proved the point, conjuring a startlingly bitter sound from the orchestra.

The fact that Haitink eventually had to seize the baton and show by example reveals something else about conducting. Yes, there is the thing called “stick technique”, which can be taught. Yes, there is an arsenal of musical knowledge that the conductor needs to have. But I’m struck by how little of the conductor’s role is explaining a high falutin’ “interpretation” to a group of players.

Great conductors like Haitink are suspicious of too much talk. They know that at bottom, there is something deeply primitive and instinctual about the ability to make 70 people breathe, move and feel as one. It’s a gift: you’ve either got it or you haven’t.