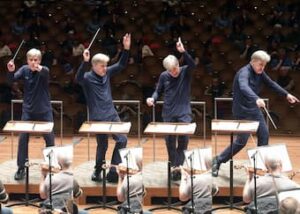 The job of a conductor has evolved greatly over the years. From a simple timekeeper, to rehearsal director, to full-blown interpreter, the conductor’s role has no doubt grown in prominence. But how do they do what they do? What’s all the arm-waving about? And how do orchestras understand what’s being said to them when no actual words are uttered?

At the most basic level, a conductor’s job is to keep everyone playing at the same speed. They do this by beating time with their hands, and sometimes a baton is used for extra clarity, especially to help musicians in larger orchestras, who are often seated quite a distance from the podium.

How exactly they do this varies from person to person, but there are a few universal patterns that help musicians to understand which beat of the bar is being shown. For example, the first beat of the bar (the ONE of 1, 2, 3, 4, for example) is known as a ‘downbeat’. For downbeats, the conductor’s hand always moves down, a sort of x-marks-the-spot idea. There are exceptions to this, but by and large, the only time a downbeat is seen is on the first beat of the bar, giving a strong anchor point for all to see.

What happens beyond that, again, varies, but there are certain basic shapes and patterns conductors use to denote whether the music is in four, like if you were playing Twinkle Twinkle Little Star, or three, for something like Happy Birthday. Musicians should know at all times which beat of the bar they’re on, but in case they get a bit lost, the patterns a conductor makes helps them to get ‘back in’, to find the right beat of the bar and keep in time with everyone else.

The way the conductor presents the beats impacts how the orchestra plays. Large, sweeping gestures indicate something needs to be played loudly, while small, delicate gestures encourage softer playing.

By contrast, in this freer section in Tchaikovsky’s 5th Symphony, her wider gestures encourage much more expressive freedom from within the orchestra. 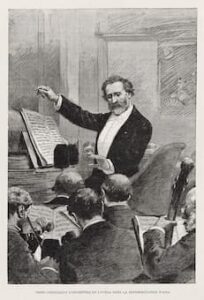 Away from the louds and softs, the broader style of conducting is adjusted depending on the piece being performed. With a concerto, for example, the priority is to stay locked in with the soloist, so the conductor may conduct with sharp, precise movements, to enable the musicians to stay tightly glued together. In a symphony, where much more of the music-making comes ‘from within’ the orchestra itself, the conductor can sit back and use much broader gestures to encourage the musicians to play more freely and find a collective sound themselves.

There are many, many ways to conduct a piece of music, and the conductor’s job is as much about body language as it is about the technique of beat patterns. The conductor can show a whole range of emotions and expressions away from just their hands; the whole body plays a part in communicating their ideas, and the orchestra is trained to pick up on these signals and interpret them through their playing.

Away from the actual music, the conductor is also responsible for structuring rehearsals, for keeping them moving at a good pace, for not losing the energy in the room, and – crucially – making sure they don’t run out of time to get through everything. One eye is always on the clock, and the way a conductor takes a rehearsal – their mannerisms, demeanour and general attitude – all play into how effective the final performance is.

Now we know a little more about the basics of conducting, it is perhaps time to take a closer look at how exactly these mannerisms, demeanours and attitudes differ from one conductor to the next. What exactly is the difference between a ‘good’ and ‘bad’ conductor?