“The condensed voices of a whole country” 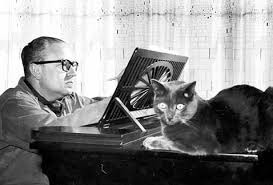 In 2016 we celebrate the 100th birthday of Alberto Ginastera (1916-1983), considered one of the most important classical composers of the Americas! Continuously at odds with the repressive military dictatorship of his native Argentina, he successfully blended indigenous music rooted in the Argentinian Gaucho tradition with more rigorous elements of European art music. “To compose, in my opinion,” he writes, “is to create an architecture. In music, this architecture unfolds in time. When time has passed, when the work has unfolded, a sense of inner perfection survives in the spirit. Only then can one say that the composer has succeeded in creating that architecture.” Eventually, Ginastera left the folk idiom behind and incorporated traditional elements into increasingly abstracted forms, including the flexible application of the twelve-tone system proposed by Arnold Schoenberg. During the Cold War, and mirroring political calls for Latin America to modernize, Ginastera enjoyed great popularity in the United States; today his music has all but disappeared from the concert stage.

Alberto Ginastera was born in Buenos Aires, the son of Catalonian and Italian immigrants. A precocious musical talent, he formally studied at the Williams and National Conservatories. Within a couple of years his music received national acclaim and featured in prominent performance venues. He first came to international attention in the1940s with two ballet scores. Panambí is based on a supernatural legend of love and magic from the Guaraní Indians, a tribe from the headwaters of the Rio Paraná in northern Argentina, while Estancia (Cattle ranch) is a powerful and passionate evocation of the vast and enigmatic Argentine pampas and the spirit of gaucho. These creative allusions to Argentinean folk materials spawned invitation to Tanglewood and a grant from the Guggenheim Foundation. His visits to the United States, and his friendship with Aaron Copland was highly influential in his future works, and his music gradually borrowed sonorities and procedures from the serialist and experimentalist movements.

His work as a composer, educator and champion of new music quickly put him at odds with the political views of the Perón government. In 1952, he was dismissed as director of a conservatory when he refused to allow it to be renamed “Eva Perón.” And when his opera Bomarzo premiered in Washington, it became widely known as the “topless opera.” It featured an explicitly erotic ballet, and “four female dancers quit the cast rather than perform in nude body stocking.” Before its planned debut in Buenos Aires, the Argentinian military dictatorship banned the work, condemning its “obsessive reference to sex, violence and hallucination.” Ginastera pointed out the hypocrisy of the censors by writing, “Salome is sex. Tosca is violence. Boris Godunov is hallucination, and Wozzeck is all three together.” Above all, Ginastera was searching for a new form of modernist expression. “There are no more folk melodic or rhythmic cells, nor is there any symbolism,” writes the composer. “There are, however, constant Argentine elements such as strong, obsessive rhythms, meditative adagios suggesting the quietness of the Pampas; mysterious sounds reminding the cryptic nature of the country.” Mired in domestic and political crises by 1970, Ginastera moved to Switzerland and settled in Geneva. During his last period as a composer, folk influences are fully subsumed into a rich and modern idiom. And while these works have been wholly neglected, they represent the “logical culmination of Ginastera’s evolution from militant nationalist to citizen of the Western Hemisphere.”