In Tune Arts
Composers and their Poets: Beethoven I
by Maureen Buja November 25th, 2016
Tags: Beethoven 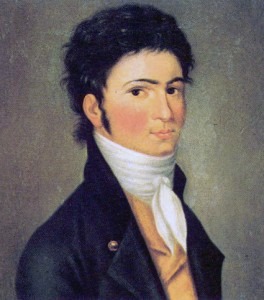 When we think of Beethoven (1770-1827), we think of his orchestral music – great symphonies that brought a century-old genre forward. By the end, it wasn’t enough to have a large orchestra, he also had to have a chorus as part of the symphony as well.

Yet, as we know from his piano sonatas, there is a quiet and intimate side to Beethoven. It’s not all bombast and thundering chords. And, in contrast to Schubert, he set songs in languages other than German, many of which were folk-song arrangements, such as his Op. 108, WoO 156 collections of Scottish Songs; WoO 152, WoO 153 and WoO 154 collections of Irish Songs; WoO 156, Welsh Songs; and WoO156b of British Songs. In addition there were 2 collections of Songs of Various Nationalities in languages such as Swiss German, Danish, Italian, Spanish, and Polish, and so on. It is in this looking outside Germany that we start to see the internationality of Beethoven.

At the same time, he set the standard poets and non-standard. His setting in 1816 of the poems by a minor poet / physician named Alois Isidor Jeitteles is important because this was the first song-cycle, i.e., set of songs designed to be sung in sequence. Up to this point, songs were stand-alones. They might have been published in collections, but singers were free to choose what song or songs they wanted to sing together. An die ferne Geliebte (To the Distant Beloved) was a collection of six songs designed to be sung in one order. There’s a thematic linkage between the songs and no song is intended to be sung separately. Unlike the next song-cycle setting, Schubert’s Die schöne Müllerin, An die ferne Geliebte is not a chronological narrative. Beethoven referred to the cycle as a Liederkreis, or song circle, and so we have the theme of the first song connecting to the theme of the last song. 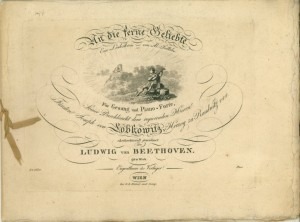 Cover for the first edition of An die ferne Geliebte

The poet Jeitteles (1794-1858) had published a couple of poems that had been issued in pamphlets before 1815. It is not known if Beethoven contacted Jeitteles and commissioned the six poems or if they had circulated and Beethoven saw them. As is common with many early Classical poetry, this work is full of the intense longing of unfulfilled love. It is not just the sound of her name that torments him, it is the very fact of their separation that brings him pain.

Beethoven: An die ferne Geliebte, Op. 98: 1. Auf dem Hügel sitz ich spähend (Hermann Prey, bass-baritone; Wolfgang Sawallisch, piano)
6. Nimm sie hin denn, diese Lieder
Beethoven also set poems by the leading poets of his day. His setting of Goethe’s Kennst du das Land, wo die Zitronen… in 1809 can be compared to that same song set by Schubert in 1815 and we can get an appreciation for the difference in their approaches. Both composers are trying to recapture the scenario set up by Goethe: that of a young child, with a borrowed guitar, singing a song about place she’s never been.

Beethoven: 6 Songs, Op. 75: 1. Mignon (Ann Murray, mezzo-soprano; Iain Burnside, piano)
Schubert: Kennst du das Land? (Mignon’s Gesang), D. 321 (Gundula Janowitz, soprano; Irwin Gage, piano)
The poem comes from a 1796 novel published by Goethe, Wilhelm Meisters Lehrjahre (Wilhelm Meister’s Apprenticeship). We follow our eponymous hero through a coming-of-age story but more than that, it’s the story of Wilhelm’s education, thus giving rise to the possibilities of discussions of literature, philosophy, and politics, and, dramatically, his romantic disillusionment. The poem, Kennst du das Land, opens the third book of the eight-book novel. Wilhelm opens his door and hears Mignon singing the song. The song text (Do you know the land where the lemon-trees bloom?) is about Italy and the lure of the warm south.