We’ve looked at Schubert’s song cycles, but that was only a small part of the enormous number of lieder he wrote. There were many other poets he set than just the majors we are so familiar with (Goethe, Schiller, and so on).

One song that in his setting seems to evoke a bit of Beethoven is An den Mond (To the Moon). Listen to the opening piano line and see if you can imagine the Moonlight Sonata. Schubert’s song was written in 1815 and published in 1826, and Beethoven’s immortal work was published in 1802, so it was certainly in the air to influence Schubert.

The poet for An den Mond was Ludwig Heinrich Christoph Hölty (1748 – 1776) who had started his university career studying theology but became one of the founders of the Hain society at the University of Göttingen. He left university in 1774 and died two years later. He was known for his love of folksong and specialized in ballads, often with a melancholy nature. Schubert set over 25 of his poems.

An den Mond is set at night, where a lover asks the moon to light the place where his lover once sat so that he can lay a wreath to her memory.

Schubert: An den Mond, Op. 57, No. 3, D. 19 (Christianne Stotijn, mezzo-soprano; Joseph Breinl, piano)
A dark tale of regicide comes in the setting of Der Zwerg (The Dwarf). The queen is aboard a boat with her dwarf and he strangles her out of jealousy for her love for the king. He does assure her that he will hate himself forever for his crime – she is not comforted. Schubert gradually increases the tension through the work until the end, as the dwarf sails away, never to land again.

The poet, Matthäus von Collin (1779 – 1824), was a friend of Schubert and Schubert set 5 of his poems. Within Vienna, both Matthäus and his older brother Heinrich made their names as poets and playwrights. 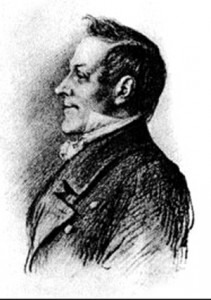 A curious metaphysical song is Auflösung (Dissolution), where the poet bids the sun hide its light because he has become too bright from his own happiness. Nature should depart because his heavenly singing will bring the end of the world.

Johann Mayrhofer (1787-1836) shared rooms with Schubert for a number of years until Schubert moved out because of Mayrhofer’s depressive nature. Mayrhofer worked in the Press Censor’s office and after Schubert’s death, became so depressed he threw himself to his death from a window in the Censor’s office. Schubert set nearly 37 of Mayrhofer’s poems and used his librettos for two of his operas.

Schubert: Auflösung, D. 807 (Ian Bostridge, tenor; Julian Drake, piano)
A common theme through this list has been that so many of these poets were Schubert’s friends – we will continue with that idea in the next section.