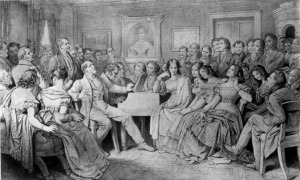 One of the most enduring images of Schubert as a musician is an 1868 drawing of one of his musical evenings. The engraving by Moritz von Schwind.

The image was made from memory by Schwind 40 years after the event and shows Schubert at the piano, with singer Johan Vogl next to him. Other people in the room include composer Franz Lachner, artist Moritz von Schwind, painter Wilhelm August Rieder, painter Leopold Kupelwieser, playwright Eduard von Bauernfeld, poet and librettist Franz von Schober, playwright Franz Grillparzer and, as a picture on the wall, the Countess Caroline von Esterházy. The friends are grouped by their fields: the artists (Rieder, Schwind, and Kupelwieser) stand behind the seated women; the literary friends (Franz Grillparzer, Johann Senn, Johann Baptist Mayrhofer, Ignaz Castelli, and Eduard von Bauernfeld) are seated at the right. The poet Schober is in a disgraced position. He’s not seated with the other writers, but is seated in the second row on the far right and is more engaged in conversation with Justina von Brchmann seated at his side.

Schwind was memorializing a past event and including in it all that he could. A Schubert song evening, better known as a Schubertiade, could have very few people or up to 100. Not only Schubert’s songs were performed but also there were poetry readings, dances, and other performances.

Schubert set many minor poets, including Georg Phillip Schmidt von Lübeck (1766-1849), who was otherwise known as a medical man and a bank manager. Schubert set his poem Der Wanderer (The Wanderer), and it was, next to Erlkönig, one of the songs that brought him into the public eye. 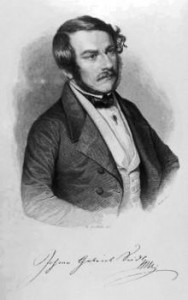 The lover comes down from the mountain and everything seems cold and plain – he’s had to leave his beloved and with her, he left his happiness. This song was the source for his Wanderer Fanstasy, D. 760, written in 1822. 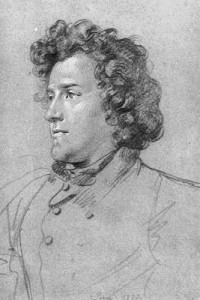 Johann Gabriel Seidl (1804-1874) was curator of the Coin Collection at the Imperial Museum. As one historian noted, this left him a lot of time to write. His poem Die Taubenpost (The Pigeon Post) appears as the final song in Schubert’s Schwanengesang collection. It’s a light poem about the service provided to the lover by his carrier pigeon that unceasingly carries love notes to his beloved.

Schubert: Schwangengesang, D. 957: No. 14. Die Taubenpost (Ian Bostridge, tenor; Antonio Pappano, piano)
Another minor poet set by Schubert was Johann Senn (1795-1857), who only published one book of poetry. He was a failed student, having not graduated in philosophy, law or medicine, all of which he studied. He eventually became so politically problematic that he was deported to the Tyrol and couldn’t return to Vienna.

His poem Schwannengesang (Swan Song) is a combination of the Romantic longing for death that runs through so much of the literature and the belief that the silent swan’s great musical moment was at death – and so it is for this poet: he fears annihilation, but rejoices in transfiguration. The poem was set by Schubert in 1822, but wasn’t published by Senn until 1838.