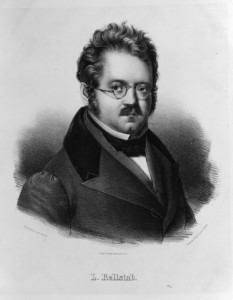 We mentioned the collection Schwanengesang in our last Schubert article. The collection was put together posthumously by Schubert’s publisher without regard to Schubert’s usual practice or Schubert’s probable wishes. Schubert never mixed his poets and also had a firm regard for the order in which a poet’s works appeared.

In Schwanengesang, the first 7 songs are all to texts by Rellstab. Ludwig Rellstab (1799-1860) was a writer and a musician, as well as being a regular contributor to the Berlin Allgemeine musikalische Zeitung. Rellstab sent his poetry to Beethoven, who didn’t set them, and it is thought that those same poems came into the hands of Schubert, where they appear as the first songs in Schwanengesang. Rellstab is remembered today as the author of the comment about Beethoven’s Piano Sonata Op. 27. No. 2, that resulted in the name by which it is best known, The Moonlight Sonata.

The first song, Liebesbotschaft (Love’s Message), can be heard in relation to the opening of the much earlier Die schöne Müllerin. In the poem the poet asked the little rushing brook to take a message to his beloved, refresh her flowers, and lull her to sleep and whisper dreams of love to her. We have the brook, but we also have a much more subtle set of messages and desired results.

Schubert: Schwanengesang: No. 1. Liebesbotschaft (Ian Bostridge, tenor; Antonio Pappano, piano)
In a later song, Stänchen (Serenade), we have one of the most familiar of the Schwanengesang songs. The poet lover is in the garden, sending up his songs to his beloved. Just as the nightingales beckon her to come outside, so should his song, to where he waits, trembling, for her. Schubert sets the song almost as if he’s rocking someone to sleep, but then we have slight climaxes that tell us this is not about sleep at all. The turn towards the minor just before the ending is perfect. The lover is not at all certain she will come down to him.

Beginning in February 1815 and continuing on for a few more months, Schubert was fascinated by the poetry of the recently deceased Theodor Körner (1791-1813). This young writer had come to Vienna in 1811 and met the leading musicians of the day (Beethoven, Weber, Moscheles and Meyerbeer). He was discussing various opera libretto projects with Beethoven and Spohr but died, age 21, in battle against Napoleon as a member of the Lützow Free Corps before anything could be finalized.

His setting of the poem Amphiaraos is Schubert in a heroic manner. The poem takes a subject of Greek mythology, where Amphiaraus was one of the seven against Thebes. After the death of Oedipus, his two sons, Eteocles and Polynices, were to rule Thebes in alternate years but after his first year, Eteocles refused to give the power over to his brother. Polynices raised an army (detailed in the Aeschylus’ play Seven Against Thebes). Polynices fights his brother and both are killed. Amphiaraus comes to grief when he fights a son of Poseidon and is killed by a thunderbolt from Zeus. This is the story in the poem: we have the story of Amphiaeros off to battle but already foretelling the doomed ending of the battle. And then his death from the thunderbolt from Zeus at the end where he and his horse and chariot are swallowed up by the ground.