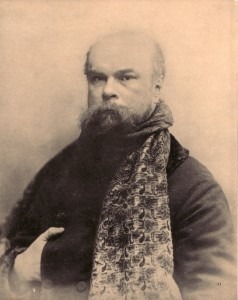 Maurice Ravel (1875-1937) set a distinctive poem by Paul Verlaine (1844-1896) in 1895, but it didn’t appear in print until 1953, some 16 years after his death. Un grand sommeil noir from Verlaine’s collection Sagesse, is a remarkably morbid poem about the end of life being compared to a cradle locked in a tomb. 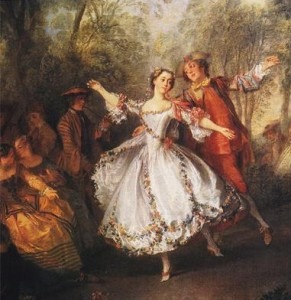 Ravel: Un grand sommeil noir (Dietrich Fischer-Dieskau, baritone; Hartmut Höll, piano)
This was one of 2 poems of Verlaine’s that Ravel set. The other, “Sur l’herbe” takes the form of a drunken conversation among a group of people seated on a lawn including an abbot, a marquis, Marie-Anne de Cupis de Camargo, a ballet dancer at the Paris Opéra, and other unnamed ladies and gentlemen. 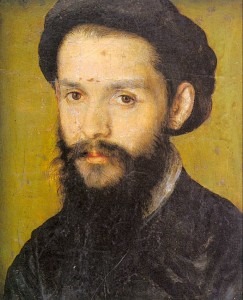 Portrait of a Man, thought to be Clément Marot (attrib. to Corneille de Lyon)

Ravel: Sur l’herbe (Julia Kogan, soprano; Tyson Deaton, piano)
Ravel also experimented with the poetry of Clément Marot (1496-1544). This Renaissance poet made his name at the French court of Francis I. He was frequently in trouble with the authorities and would write poems to the king or to Queen Marguerite to get himself released, eventually having to flee to Italy before returning to France in 1539. He died in Italy, having fled there again after an argument about translating the Bible into French.

Marot’s poetic style became known as ‘marotique,’ blending medieval forms with modern figuration. In the same way, Ravel sought to mix 15th century stylings with the 20th century ideals. In the first song, D’Anne qui me jecta de la neige (To Anne who threw snow at me), the poetry has the Petrarchan contrasts of snow / fire, cold / burning before finally turning the poem so that it is her kindness that will warm him. Ravel’s setting instantly thrusts us out into the cold but nicely warms by the end.

Ravel had taken up the poetry of Stéphane Mallarmé by 1896 but it was in 1913 that he set a cycle of three of Mallarmé’s poems for voice and small ensemble. Mallarmé (1842-1898) was a major Symbolist poet, best known for his collection Les fleurs du mal. The poems that Ravel set are all about love, but it’s not necessarily a happy time. In the last song, Surgi de la croupe et du bond (Rising up from its bulge and stem), the poet describes an empty glass that he believes his mother and her lover never drank from in love – he feels that nothing will come of this passionless relationship, there is no hidden rose. Ravel was puzzled by this very difficult poem by Mallarmé and to solve it, he took a clue from Schoenberg’s Pierrot lunaire, using the same instrumental ensemble. Listen in Ravel’s setting for the crystal of the glass shimmering in the background.

Ravel: Trois Poèmes de Stéphane Mallarmé: No. 3. Surgi de la croupe et du bond (Didier Henry, baritone; Patrice Kirchhoff, flute; Jacques Duhem, violin; Raymond Glatard, viola; Angeline Pondepeyre, piano)
The poetic settings of Ravel are particularly sensitive to the time and place of the poetry’s creation – he created a Renaissance/Modern setting perfect for the experimentation of Marot and then jumped ahead to the most modern of sounds in his setting of Mallarmé’s intricate poetry. He matched the free poetry of Renard and de Parny with settings that freed the poem in its musical setting from the constraints of form.