Artists Interviews
In Touch with Anne Denholm
by William Cole May 11th, 2017 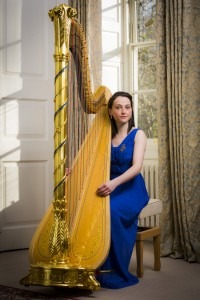 Anne Denholm is one of today’s outstanding young harpists. A recent graduate of the Royal Academy of Music, she’s making waves in the UK and abroad as a soloist, chamber musician and collaborator. There’s demand from high places, too – in 2015 she was appointed Official Harpist to His Royal Highness The Prince of Wales, an ancient position officially reinstated in 2000 by The Prince to help celebrate and foster musical talent in Wales. I should disclose at this stage that she is also a friend and collaborator – we’ve spent the last year developing a new solo piece for her, Her Face Was Full of Woe, which she’s been playing in some of her recitals. I caught up with her to see how she’s balancing a heady mix of solo performance, collaborative work and playing for royalty.

How did you start playing the harp?

By the age of 8 I was already playing the piano and violin, but my school offered subsidized instrumental lessons, and I decided it would be nice to have a go on the harp. I forgot to tell my parents actually, so they received a slightly surprising letter saying that I was beginning harp lessons! So I started then, and didn’t really look back.

I gave up the violin! And I decided to concentrate more exclusively on the harp. The big step was when I began studying at the Junior Department of the Royal Welsh College of Music and Drama – during my time there, music started to become a more serious part of my life. I then went on to study at the Purcell School [an elite music school near London], the Royal Academy of Music and Cambridge University.

You’ve recently been appointed harpist to HRH The Prince of Wales. Can you explain what the job is like?

In my most regular activities as part of the post I provide music for events, so that might be background music at dinners or functions, or it could be more prominent musical roles at ceremonies or concerts. For example, in June I played at the Royal Opening of the Fifth Assembly for Wales. It’s really wonderful to bring music into these contexts, and of course it’s a huge honour to hold the position. There are also three broader aims behind the post: to promote the harp as an instrument, to promote the culture of Wales, and to support a young artist near the start of their career.

What are you up to apart from that?

Well, I’ve recently been working on your piece, which has been great and a long-term ongoing project. Apart from solo work I am doing quite a lot of chamber and orchestral music – there has been a national tour with Ensemble Cymru (I was appointed their principal harpist in October 2016), recitals with violinist Simon Smith and flautist Alena Lugovkina, and freelance orchestral work across England. I’m learning lots of new repertoire, doing lots of different things, and keeping busy! 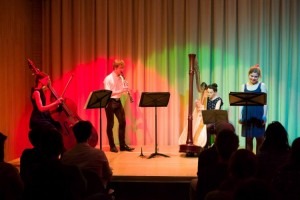 Yes, The Hermes Experiment is a contemporary quartet of harp, double bass, clarinet, and soprano voice. We do three main things – we perform free improvisations, we arrange existing music for our combination of instruments, and we also commission a lot of new works from different composers. We have not yet found an existing work for our combination, so if anyone finds one, do let us know! We find ourselves in a wide variety of settings – recently we’ve found ourselves playing in pubs and performing in concert halls, as well as doing some work in schools, which has been great.

Anne Denholm is Official Harpist to HRH The Prince of Wales. For details of Anne’s future performances, visit www.annedenholm.com.