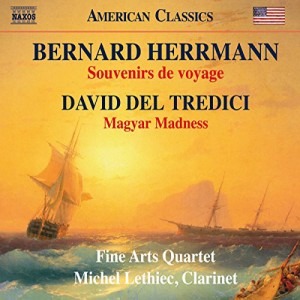 “When I first became acquainted with the scores of Bernard Herrmann’s Souvenirs de voyage and David Del Tredici’s Magyar Madness, I was struck by how much these seductive quintets had in common, despite being completely different in mood and style. Both of these compelling works were written for string quartet plus clarinet by distinguished American composers who were pioneers in the Neo-Romantic movement, and both wistfully evoke the spirit of diverse European cultures. They seemed to be the ideal, odd couple. And Magyar Madness would be a world première release, to boot, so I felt they just had to be recorded together.” – Ralph Evans, Fine Arts Quartet.